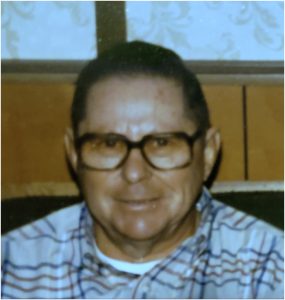 Carlton Edgar Cashion, 91, of Stony Point, departed this life on Saturday, April 13, 2019 in Taylorsville at Valley Nursing and Rehabilitation Center.

He was born on May 19, 1927, in Alexander County, to the late Joseph Edgar Cashion and Christine Viola Benfield Cashion. He served in the Navy during World War II as a Navy Seaman 1st Class on various ships, some of which were the U.S.S. DELONG, U.S.S. SCOTT, and U.S.S. FALGOUT.

He leaves to cherish the memory of his life his sister, Janine Ethel Cashion Lentz; special cousin and caregiver, Dorothy Kerley; as well as a host of nieces, nephews, cousins, friends, and relatives.

A graveside service will be held Tuesday, April 16, at 2:00 p.m., with military rites in the Stony Point Cemetery. Reverend Mitchell Rash will be officiating the service.

Condolences may be e-mailed to the Cashion Family by visiting our website at www.chapmanfuneralhome.com.

Chapman Funeral Home is honored to be assisting the family of Mr. Carlton Cashion.