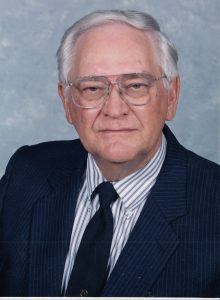 Harold was born on March 5, 1929, the oldest child of the late James Perry Pennell and Tressie Vee Brown Pennell of Taylorsville. Harold married Helen Martha Wilson in 1950, and they resided in Lenoir until 1970 when they moved their family back to their hometown of Taylorsville.

Harold worked as a loom fixer for Schneider Mills in Taylorsville for thirty years, after which he worked for 15 years with his brother at Pennell Fence Company of Hickory. Harold had many interests including music, gardening, genealogy, and local history.

Funeral arrangements are entrusted to Alexander Funeral Service, and condolences may be made online at http://www.alexfuneralservice.com/. The family will receive visitors on Monday April 22, 2019 at Alexander Funeral Service in Taylorsville from 1:30 – 3:15 p.m. prior to the funeral service at 3:30 p.m. Reverend Jamie Steele and Reverend Gary Jennings will officiate. Burial will follow at Taylorsville City Cemetery on East Main Avenue (Hwy 90).

Memorial contributions may be made to East Taylorsville Baptist Church (PO Box 906, Taylorsville, NC 28681), where Harold was a long-time member. Also, memorials may be made to Carolina Caring (Hospice) of Catawba County (3975 Robinson Rd, Newton, NC 28658).