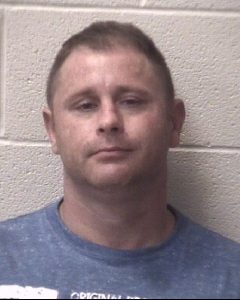 A local man wanted for failure to appear in court has been arrested following a traffic stop.

On Monday, April 22, 2019, officers with the Alexander County Sheriff’s Office conducted a vehicle stop at the intersection of US Highway 64 and Liledoun Rd.  The vehicle was stopped due to an improper tag and the driver was identified as Adam Colby Starnes, age 41 of Taylorsville.  There was an active warrant on Starnes for Failure to Appear.  Starnes was also driving on a suspended license. Starnes was placed under arrest and a search was done of the vehicle.  Located in the vehicle was a plastic bag with a crystal substance inside.

Starnes was transported to the Alexander County Detention Center.  He is charged with Felony Possession of a Controlled Substance, Misdemeanor Possession of Drug Paraphernalia, Failure to Appear, and was also written citations for Driving on a Suspended License and Improper Tag.  He is being held under an $8,500 secured bond and has a first appearance date of April 29, 2019 in Alexander County District Court.