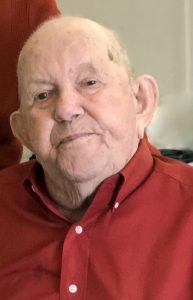 Born in Taylorsville, on April 3, 1923, he was the son of the late Willie Lee and Vinona Deal Harrington. He has two surviving siblings, Gladys Hayes of Sweet Home, Oregon, and David Harrington (wife Evelyn) of Statesville.

Wayne was a veteran of the US Navy, having served in the Philippines during WWII. He was retired from Schneider Mills as a fixer.

He is survived by his wife of 70 years, Goldie Barnes Harrington, and their five children, Larry Harrington (wife Jaretta) of Claremont, Martha Brewer (husband Lindsey) of Cherryville,  Beverly Johnson (husband Mike) of Statesville,  Sharon Harrington of Kernersville, and Sarah Crouse (husband Tommy) of Hudson. Wayne had six grandchildren, James Harrington, (Erin Gulick) and Joni Harrington of Claremont,  Lynn Johnson (wife Alisha) of Statesville,  Charles Dyson (wife Christy) of Greensboro, Bryan Crouse (wife Christy) of Taylorsville, and David Crouse of Granite Falls. He was the proud great-grandfather of Trent, Lanie and Cooper Crouse of Taylorsville, Xander and Emma Dyson of Greensboro, Cana Gulick of Claremont, and Lyndsey, Alexis and Lauren Johnson of Statesville. He is survived by many nieces and nephews.

He was preceded in death by a son, Henry Warren, and seven siblings.

Wayne served in many areas of Three Forks Baptist Church, as Training Union Department Superintendent, teacher in the Junior Department, member of the choir, he had the job to start the oil furnace at church, clerk of church, pastor search committee, the cemetery administrator for 32 years, and a faithful member of his Sunday School class until his health would not permit him to attend church. Black Oak Ridge Baptist Church held a special place in his heart.

Wayne had a great love for his family and time spent with family. He will be remembered as a farmer, hard worker, and a quiet lover of the Lord.