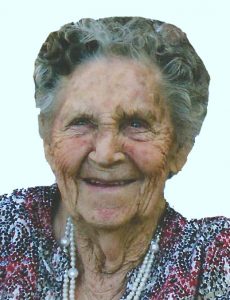 Sue was born April 11, 1925, in Alexander County, the daughter of the late Will Echerd and Buna Chapman Echerd.

She had worked for Lewittes Furniture before retirement and was of the Methodist faith. She loved working in the garden, reading her Bible, and enjoyed being outside sitting in the swing.

Including her parents, she was preceded in death by her sister, Flora Lee Posey; two brothers, Bill Echerd and LC “Jake” Echerd; and a daughter-in-law, Shelia Morrison.

The funeral service will be held at 4 p.m., Monday, May 6, 2019 at Mt. Wesley Wesleyan Church. Pastor Scott Atkins will officiate. Burial will follow in the Rocky Springs United Methodist Church Cemetery. The family will receive friends one hour prior to the service.

Honorary pallbearer will be Michael Morrison.

Adams Funeral Home and Cremation Services is honored to be serving the Morrison Family.