By D.N. PENNELL, Jr.
The Alexander Central Baseball Team made it 10 wins in a row Tuesday evening, May 7, with a 3-2 win over the North Iredell Raiders in the first round of the state playoffs.
The Cougars (21-7) entered Tuesday’s NCHSAA contest as the third seed in the 3A Western bracket. In its first round contest, ACHS faced a pesky North Iredell in a nail-biter at Bob Gryder Stadium in Taylorsville.
ACHS jumped out to a 3-0 lead and thwarted a North rally in the final frame to survive and advance to round two of the post season. 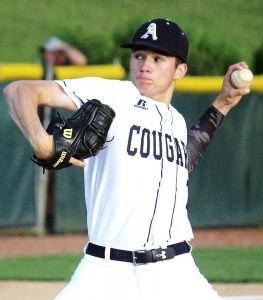 Junior Bryson Hammer, right, did not allow a hit in six-plus innings of work on Tuesday night against the North Iredell Raiders. Hammer earned the mound win and upped his pitching record to 7-2 on the year.

A two-run double by Seth Sigmon put the home team in front 2-0 in the first. ACHS plated an additional run in the fifth on an RBI off the bat of junior Jacob Bebber.
The score was 3-0 entering the top of the sixth and Cougar starter Bryson Hammer had not allowed a hit. After recording one out in the sixth, Hammer exited the game after reaching the pitch-count allotment. He allowed one run and did not allow a Raider hit in six and one-third innings. He struck out 11.
Jeremy Simpson followed Hammer to the mound and recorded the second out of the frame, while allowing another Raider run. Senior Dawson Elder spelled Simpson with two outs in the seventh and closed the game for the ACHS save.
Sigmon, Bebber, and Byron Younts tallied two hits apiece to pace Alexander’s eight-hit offensive effort.
With the win, ACHS moves to round two where it will face Cuthbertson in a game tentatively scheduled for Friday, May 10, at 7 pm at Gryder Stadium. Cuthbertson defeated SW Guilford 3-2 in the opening round on Tuesday.