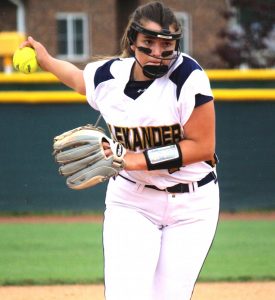 By D.N. PENNELL, Jr.
The ACHS Lady Cougar Softball Team’s defense of last season’s state title started with a resounding 11-1 win over the Stuart Cramer Storm on Tuesday, May 7, at Central Park in Taylorsville.
The Lady Cougars, which are seeded sixth in the NCHSAA 3A West playoff bracket, scored six runs in the home half of the first inning, and never looked back en route to the 10-run opening round win on Tuesday.
The victory pushes Alexander’s overall record to 19-6 and moves the team into a second round game against Parkwood (13-6) tentatively set for Friday, May 10, at 6 pm.  Parkwood advanced Tuesday with a 7-1 win over Enka.
Freshman hurler Faith Carrigan chalked up the pitching win in Tuesday’s rout of Cramer. The right-hander did not allow a hit in three innings of work and ran her season mark to 16-4. Kara Hinkle pitched the final two innings for Coach Kylie Hamby.
Offensively, Alexander pounded out 13 hits. Freshman leadoff hitter Peyton Price enjoyed her best game as a Lady Cougar with a four-for-four effort at the plate. She added two stolen bases and two runs scored. Junior Mattie Starnes tallied three hits and drove in a team-high four runs, while Ashley Seagle paired hits and plated three.