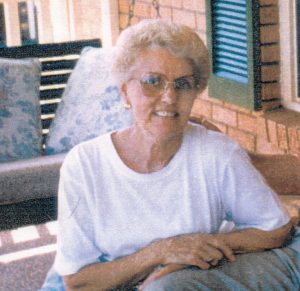 She was born to the late Obie Elmore and Nina Rose Clark. Carfene attended Russell Gap Baptist Church, enjoyed gardening, sewing, time with her family, gospel singings, but most of all her salvation and her relationship with her Lord and Savior.

In addition to her parents, she was preceded in death by a sister, Connie Bates; three brothers, Cody, Clyde and Claude Clark; and a daughter, Darlene Shew.

Visitation will be Thursday, May 16, 2019 from 2:00 p.m. – 2:45 p.m. at Alexander Funeral Service with the funeral service following at 3:00 p.m. Rev. Taylor Pennell, Rev. James Bumgarner, and Rev. Gary Jennings will be officiating. Burial will follow in the Shew Family Cemetery.