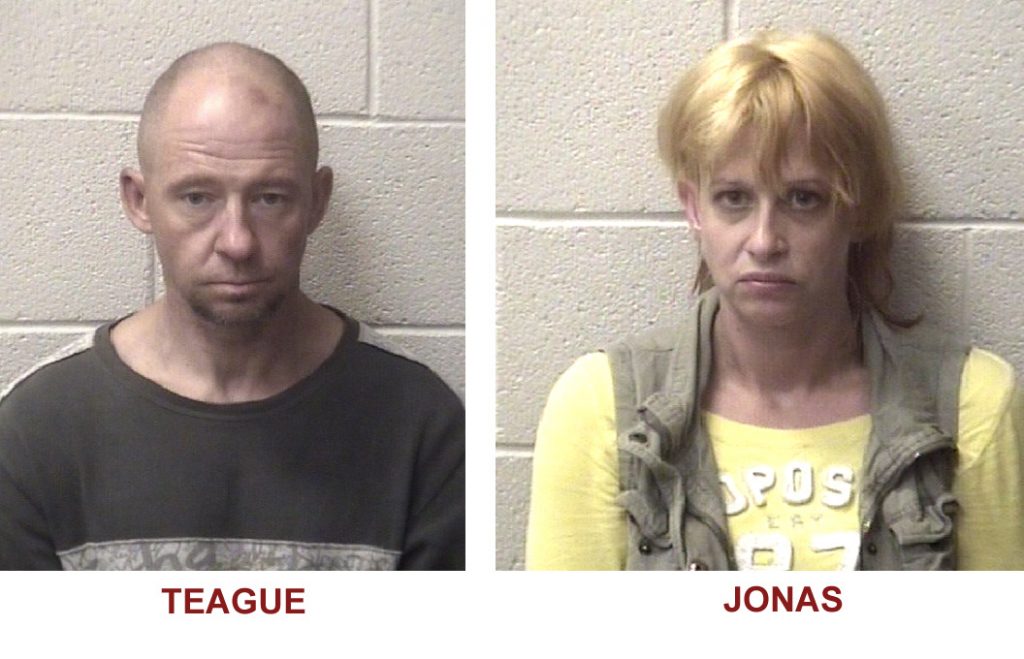 A manhunt on Wednesday, May 22, in the Wittenburg area ended with two suspects being caught quickly. The manhunt was in the area near NC 16, Wayside Church Road, and Chesterfield Acres.

A chase ensued onto Rink Dam Road and A.L. Fox Road. The chase continued from A.L. Fox Road to Crowson Road and then to Wayside Church Road, into the Chesterfield Acres housing development. Teague proceeded through a pasture fence into a pasture, where the vehicle became lodged in a ditch.

The vehicle was occupied by two people: Marty Allen Teague, the driver, and Heather Shea Jonas, the passenger, who is also Teague’s girlfriend. Both individuals exited the vehicle and ran from officers into a wooded area, where Jonas was taken into custody a short time later, at the end of Fox Valley Court.

Teague was located and taken into custody at approximately 1:45 p.m. on May 22. He was found hiding beside a log in a wooded area, less than a quarter mile from the vehicle. Teague was taken into custody without incident. Alexander County EMS was notified to come and check the well-being of both individuals. Teague and Jonas were both transported to the Alexander County Detention Center.

The Alexander County Sheriff’s Office received information that Teague would be armed with a pistol and that he would not go back to prison, when previous warrants were issued for Felony Motor Vehicle Theft and Felony Breaking and Entering and Larceny, along with a violation of probation. This information made it very important to contain the area and establish a perimeter to make sure that Teague was apprehended for the safety of the community.

Heather Shea Jonas, W/F, age 36, of Taylorsville, was charged with Felony Obstruction of Justice, Misdemeanor Harboring a Fugitive, as well as a Catawba County child support warrant. She was placed under a $31,000 secured bond and was given a first appearance date of Monday, June 3, 2019, in Alexander County District Court.

Alexander Co. Schools officials issued an advisory for Wittenburg Elementary, a Code In, then canceled the advisory after the suspect was caught.