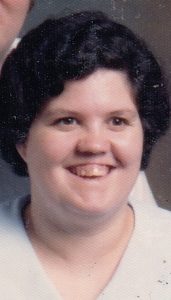 Marian “Kay” (Shook) Stafford, 67, died peacefully at her home in Taylorsville, on June 9, 2019 surrounded by her family, whom she loved. After a long battle, she finally received her new, “perfect” glorious body with her Lord in heaven.

Kay was born on July 2, 1951 to Robert Shook, Sr. and Kathleen Bell Shook, both of whom preceded her in death. She graduated in 1969 from Hickory High School and went on to get her Associate’s at Catawba Valley Commu-nity College. In 1981, Kay went on a blind date and, four months later, she married the man of her dreams, Clifford Allen Stafford on April 10, 1982.

Kay is survived by her husband; two sons, Isaac (Rachel) Stafford, and Jonathan (Regina) Stafford; a daughter. Christal (Brian) Lippincott; a brother. Lee (Re-naye) Shook; and an uncle, Jack (Marilyn) Bell. Her grandchildren were her pride and joy: Owen and Jackson Stafford, and Alex and Benjamin Lippincott.

Per Kay’s wishes, she will be cremated, and we will be holding a memorial service on Saturday June 15, 2019, at 5:00 p.m., and visitation will be one hour prior at His Image Ministries in Hickory.

We would like to thank Hospice of Iredell County, their nurse, Cassandra, and CNA, Marilyn. We would also like to express thanks to everyone who has helped us through this time with meals, visits, and prayers.