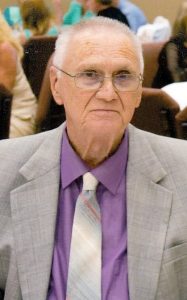 Tillet “Gerald” Harrington, 89, of Taylorsville, passed away at his residence on June 9, 2019.

Born on July 12, 1929 to the late John B. and Ida Wike Harrington, he was a member of Salem Lutheran Church. Gerald was retired from Broyhill Furniture. He enjoyed watching Braves baseball and playing music with the Dixie Ramblers in his younger days.

In addition to his parents, he was preceded in death by his wife, Margaret K. Harrington; and three brothers, Edgar, Roby and Millard Harrington.

Visitation will be held at Salem Lutheran Church on Thursday, June 13, from 1:00 p.m. – 1:45 p.m., with the funeral service following at the church at 2:00 p.m. Pastor Reed Shoaff will be officiating. Burial will follow in the church cemetery.