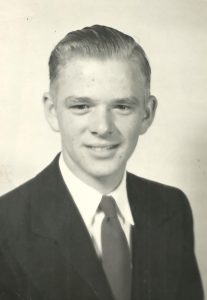 David was born July 17, 1931, in Alexander County, the son of the late William Lee Harrington and Vinona Deal Harrington.

He graduated Taylorsville High School in 1949 with honors and graduated from Indiana Institute of Technology with a degree in civil engineering.

He was a US Army veteran, who served during the Korean Conflict. He had worked as a civil engineer before retiring from Morrison Knudson in Boise, Idaho. David was a member of Fairview Baptist Church in Statesville.

Including his parents, he was preceded in death by a daughter, Lana Harrington Long; sisters, Eloise Sparks and Christine Harrington; and brothers, Paul, Lindsey, Olin, Harold, Wayne and William Harrington.

Those left to cherish his memory include his wife, Evelyn W. Harrington of the home; a son-in-law, Brian Long of California; a grandson, Bradley Long and wife Jessica of California; and a sister, Gladys Hayes of Oregon.

The funeral service will be at 2 p.m., Thursday, June 20, 2019 at Fairview Baptist Church in Statesville. Doctor T. Scott Eanes will officiate. Burial will follow in the church cemetery. The family will receive friends one hour prior to the service.

In lieu of flowers, memorials may be made to: Iredell Hospice, 2347 Simonton Road, Statesville, NC 28625 or an organization of your choice.

Adams Funeral Home and Cremation Services is honored to be serving the Harrington Family.