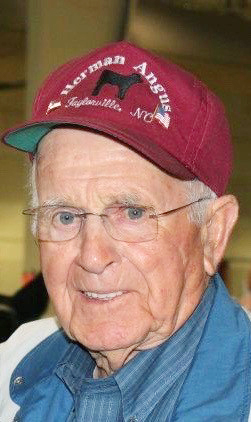 Lawrence Elijah (L.E.) Herman, Jr., 94, of Taylorsville, passed away peacefully at Caldwell Hospice and Palliative Care in Lenoir on June 18, 2019, surrounded by his family, following a period of declining health.

Born on June 3, 1925, in Alexander County, to the late Lawrence E. Herman, Sr. and Effie Crouch Jennings Herman, he was a retired merchant and farmer.

In addition to his parents, he was preceded in death by brothers, Lee Jennings, Ray Jennings, Garfield Jennings, William Herman, and Sam Barnes; and by sisters, Rachel Ford, Helen White, Edna Moose, and Joanna McCarroll.

A proud veteran of the United States Navy, where he served in the Pacific on the U.S.S. Cabot as a gunner’s mate during WWII, Mr. Herman owned and operated Woodside Grocery & Service where, for 38 years, he provided for the needs of the Sugar Loaf community and beyond. He was also a dedicated member of the Republican Party and an inducted member of the Alexander County Republican Party Hall of Fame. He was a retired member of the Taylorsville Savings Bank Board of Directors; a well-known and respected farmer raising Black Angus beef cattle for many years; and a faithful member of Salem Lutheran Church. Following his retirement, he enjoyed spending time with his grandchildren and great-grandchildren, and watching Redskin football and Fox News.

Visitation will be June 22, 2019 at Salem Lutheran Church, Taylorsville, from 2 p.m. to 2:45 p.m., with the funeral service following at 3 p.m. Reverend Reed Shoaff will officiate. Burial will follow in the church cemetery with full military rites presented by DAV Chapter 84.

Memorials may be made to Caldwell Hospice and Palliative Care at 902 Kirkwood Street, NW, Lenoir, NC 28645-5121 to honor their remarkable care and compassion; or to Salem Lutheran Church Cemetery Fund at 4005 NC Hwy. 16 N, Taylorsville, NC 28681.