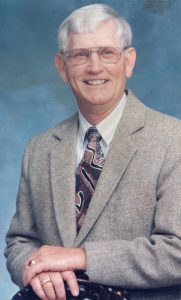 William Solon Mitchell transitioned peacefully from earth to heaven, surrounded by his children and loved ones, on the morning of Wednesday, June 19, 2019 at Rowan Novant Medical Center in Salisbury.

He was the fourth of five children born to Ramie Loid Mitchell and Mamie Lee Millsaps Mitchell on September 21, 1933 in Alexander County. He was a life-long member of Rocky Springs United Methodist Church where he had served as teacher, treasurer, and song leader. He was proud of his membership in the Boy Scouts.

His initiative surfaced early, as he trapped rabbits to sell to his teachers at Hiddenite School. He was a graduate of the Hiddenite High School Class of 1951, where he was a bus driver, member of the Future Farmers of America, and voted one of two Class Romeos. He and his classmates continued to be a close-knit group, 67 years later.

He was a proud veteran of the US Army, where he served for two years in the Eighth Army on the Demilitarized Zone at the border of North Korea and South Korea, where he kept generators running for the entire camp. In the harsh winters, he would frequently awaken to find no coat or boots to wear, only to see them later being worn by North Korean soldiers who occasionally shot at his platoon from across the border.

Upon his honorable discharge, he returned to Alexander County to join his Dad with the family farm and marry his high school sweetheart, Mary Jane Davis, on January 19, 1956. They made their home on the Mitchell Farm, growing tobacco and starting their dairy operation with Jane’s Guernsey, Trudy, and Solon’s favorite cow, Blacky One. Their dairy herd grew to over 60 head, and later they added a beef herd of Black Angus.

He served on the advisory board for Hiddenite Elementary School and was active in the Rocky Springs Community Development Association for many years, sharing his carpentry skills in the building of the Community Building. He served on the Board of Directors of Farmers Mutual Fire Insurance Company, currently Piedmont Mutual Insurance Company, for 41 years, from 1977 to 2018.

He was a charter member of Veterans of Foreign Wars Post 10,000, serving on the Rifle Squad to honor deceased veterans with the 21-Gun Salute at their interment. For a period of time, Solon was a motorcycle enthusiast.

In retirement, he traveled the United States and Canada. He had been a resident at the North Carolina State Veterans Nursing Home in Salisbury for the past two years.

In addition to his parents, he was preceded in death by his first wife, Mary Jane Davis Mitchell in 1991; his second wife, Ellamae Pearson Robinson Mitchell in 2008; his eldest sister, Mary Louise Mitchell Walsh in 2018; his brother and sister-in-law, Jimmy (2015) and Sylvia Lackey Davis (2012); and two infant nephews, Stevie Walsh and Barry Davis.

Solon’s family is grateful for the care given to him by the healthcare staff of the North Carolina State Veterans Nursing Home and Rowan Novant Medical Center.

Visitation is on Sunday, June 23, 2019, from 6:00 to 8:00 p.m., at Alexander Funeral Service in Taylorsville. A graveside service will be conducted by Rev. Robert Herron on Monday, June 24, 2019 at the Rocky Springs United Methodist Church Cemetery in Hiddenite with Military Honors by the Disabled American Veterans. Honorary Attendants include members of Hiddenite High School Class of 1951. A reception will follow in the church.

The Mitchell Family is being served by Alexander Funeral & Cremation Service in Taylorsville.