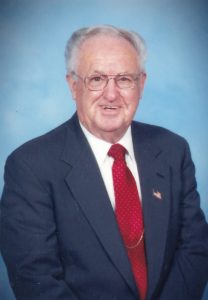 James Ruel Fox, 85, of Taylorsville, went to his eternal home on Sunday, June 23, 2019 at his residence, surrounded by his family, to forever be with his Lord and Savior.

He was born on November 11, 1933, in Alexander County, the son of the late Burrette Fox and Ethel Dyson Fox. During his life, Ruel preached 43 years at Yadkin and Fairview Baptist Churches.

After he retired in 2013, he continued preaching and serving the Lord until his death. His heart and soul were in the Taylorsville Baptist Camp Meeting. He served the Lord at Camp Meeting for 56 years as a co-moderator. Ruel loved God, his family, and his grandchildren most of all.

Along with his parents, he was preceded in death by his spouse, Shirley J. Fox; siblings; sisters, Ravy Shook and Rachel Ferguson; and brother, Rommie Fox.

In addition to flowers, memorials may be sent to Taylorsville Baptist Camp Meeting at 417 Airport Rd, Taylorsville, NC 28681.