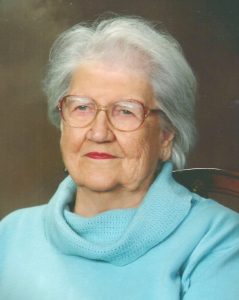 She was born September 30, 1921, in McDowell County, the daughter of the late John Sam Pyatt and Etta Holland Pyatt.

Mrs. Wagoner graduated from Lenoir-Rhyne College in Hickory and taught in the North Carolina Public Schools for 35 ¾ years. In addition to her teaching career, she and her husband, Gilmer, spent 54 years together in faithful service to the United Methodist Church.

Her excellence in teaching and devotion to high ideals won for her the induction into Alpha Delta Kappa, an International Honorary Sorority for Women Educators, in which she served for a term as State Chaplain and a member of state and national education associations and Alexander County Retired School Personnel, where she held office as President of Retired School Personnel, District Necrology Chairman, and Necrology Chairman on the local level for a number of years.

Many will remember her as the first Alexander County Hospice Director. Her untold volunteer hours of planning and developing the necessary procedures for Hospice licensure stand as a memorial.

In addition to her parents, she was preceded in death by her husband, The Reverend Gilmer Wagoner, and three sisters, Rosa Proctor, Lillie Kincaid, and Glossie Laughridge.

The funeral service will be held at 11 a.m., Tuesday, July 9, 2019 at First United Methodist Church in Taylorsville. Pastor Joel Simpson will be officiating. Burial will follow in the Taylorsville City Cemetery.  A gathering of friends will be from 10 to 11 a.m. prior to the service.

Adams Funeral Home and Cremation Services is honored to be serving the Wagoner Family.