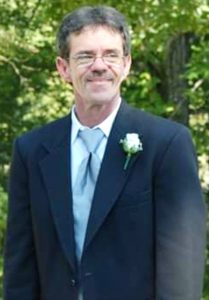 He was born in Grundy, Virginia on September 3, 1961, the son of the late Ray Hilliard Justice and Gladys Hawkins Justice Stacy. During his career, Douglas worked in the construction industry for P & L Construction Company and attended Victory Baptist Church on Midway Drive in Stony Point. He also enjoyed camping, fishing, and working on cars.

Along with his parents, he was preceded in death by his stepdad, Leray Gene Stacy, and sisters, Sandy and Linda Justice.

Those left to cherish his memory include his wife of 30 years, Susan Ann Ratliff Justice of the home; daughters, Melinda Dyson and husband Brooks of Stony Point, and Dana Justice of Stony Point; son, Chris Stiltner of Grundy, Virginia; five grandchildren; sisters, Teresa Owens and Patty Stacy of Grundy, Virginia, and Ann Hubbard of Honaker, Virginia; a number of nieces and nephews; and special friends, Tim Mecimore and Mark Smith.

The family will receive friends on Friday, July 26, 2019, from 6:00 p.m. – 8:00 p.m., at Victory Baptist Church on Midway Drive in Stony Point, and other times at the home of Melinda and Brooks Dyson. Following, the family will have a visitation in Grundy, Virginia at Shortridge-Ramey Funeral Home on Sunday, July 28, 2019, from 1:00 p.m. – 3:00 p.m., with a graveside service immediately following at Ratliff Cemetery.