The Lenoir-Rhyne University Football Team was voted to finish first in the 2019 South Atlantic Conference Preseason Coaches’ Poll as announced by the league July 31. The Bears won the league championship last year after going 12-2 with a perfect 7-0 mark in conference play, the eighth SAC championship in team history. 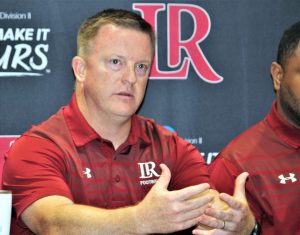 The Bears earned five first-place votes and 68 total points. LR edged out last year’s preseason favorite, Wingate, who earned three first-place votes and 64 total points. The Bears handed Wingate a 31-24 defeat in Wingate during the regular season and pulled out a narrow 21-17 win over the Bulldogs in the Second Round of the NCAA Playoffs at Moretz Stadium.
Carson-Newman was picked to finish third with Tusculum getting the final first-place vote and predicted to finish in fourth place.
The Bears open the 2019 campaign, the 100th season of football in Lenoir-Rhyne history, on Sept. 7 when they host St. Augustine’s at 6 p.m. SAC play opens for LR on Sept. 21 when Newberry comes to Hickory for a 6 p.m. kickoff.