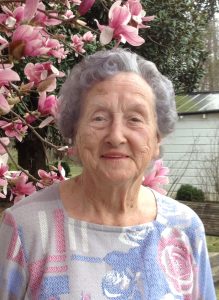 Helen was born in Rowan County on Monday, March 9, 1925. Helen was the daughter of the late Floyd Alexander and Mamie Mills Brawley. They moved to Statesville in 1940, and she was a graduate of D. Matt Thompson School in 1942.

She met Robert White in 1943 and they were married June 9, 1946. She worked at J.C. Penny Distribution Center and retired in 1987. She was a member of the Golden Retiree Group.

Helen was a member of Stony Point United Methodist Church and was very active in the church. She worked in the children’s department, member of the choir, secretary of the United Methodist Women for over 40 years, and a member of the Golden Hearts Group. She volunteered at Iredell Memorial Hospital and the Nutrition program for Meals on Wheels since 1995. She also volunteered in the kindergarten program at the Scotts Elementary for several years.

She loved to watch her two grandchildren in their sports activities when they were growing up. Helen was a loyal N.C. State Wolfpack and Atlanta Braves fan.

In addition to her parents, Helen was preceded in death by her husband, Robert, in 1994; sisters, Lucy Brown, Irene Wagner, and Wilma Bryant; and her brother, Buddy Brawley.

Helen is survived by her only daughter, Debbie White Williams (David) of Winston-Salem; two grandchildren, Carter Williams (Kristen), and Caroline Williams; a great-granddaughter, Ellee Williams; and a number of nieces, nephews, and special friends.

The family wishes to express their special gratitude to Cindy, Randy, and Sally for their immeasurable support to Helen. The family would also like to thank her caregivers, Daphne and Tammy.

Funeral Services will be conducted at 2:00 p.m. on Friday, August 9, 2019 at Stony Point United Methodist Church. Rev. Bill Taylor will officiate. Burial will take place in the church cemetery. The family will receive friends from 12:45-1:45 p.m. at the church.

The family requests, in lieu of flowers, that memorials be made to Stony Point United Methodist Church, 311 Ruritan Park Rd, Stony Point, NC 28678.

Condolences may be e-mailed to the White Family by visiting our website at www.chapmanfuneralhome.com.

Chapman Funeral Home is honored to be assisting the family of Helen Brawley White.