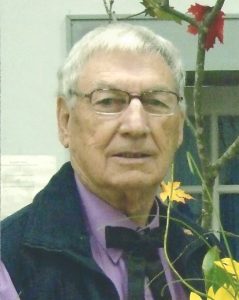 Buford was born March 26, 1927, in Alexander County, the son of the late Ralph Hendren Warren and Gertrude Payne Warren.

Buford was a 1944 graduate of Hiddenite High School. He was a proud World War II veteran of the US Navy. He was also a former member of Iredell Cattlemans Association and West Iredell Ruritan Club.

He loved to square dance and was a former member of both the Emerald Squares and Spinning Moors. He enjoyed gardening and driving his tractors.

Including his parents, he was preceded in death by sisters, Thelma Adams, Lorene Herman, Willis Pope, and Sue Richardson; and a brother, Raeford Warren; along with other family members.

Those left to cherish his memory include his wife of 39 years, Maxine Bradshaw Warren of the home; two sons, Larry Warren, and Brent Warren and wife Carolyn; a brother, Frank “Babe” Warren; and numerous nieces, nephews, great-nieces and nephews, and other relatives.

The funeral service will be held at 2 p.m., Tuesday, August 13, 2019 at Hiddenite Baptist Church. Rev. Dan Spears and Rev. Bob Herron will officiate. Burial will follow in the Hiddenite Cemetery with full military honors accorded by Alexander County Veterans Honor Guard. The family will receive friends one hour prior to the service.

In lieu of flowers, memorials may be made to: St. Jude’s Research Hospital or to Hospice.

The family would like to express their appreciation to the nurses and staff on One North at Iredell Memorial Hospital and a special thanks to Kim Ashley with Hospice.