Editor’s Note: Customer Karissa Miller shared the following first-hand account with The Times of storm damage in the Bethlehem Community on August 13.

Bethlehem Pharmacy Pharmacist Gary Sain watched from behind the pharmacy counter a heavy downpour of rain that touched down in Alexander County Tuesday afternoon.

He had customers in the store—waiting to pick up prescriptions. One customer stood close by the window watching the downpour of rain around 3:34 p.m.

Sain, who heard the rain beating down faster by the second, then advised his clerk to turn off the register. He looked up and noticed the woman standing near the front of the store and audibly asked her and everyone in the store to come and stand near the back.

Customers made their way to the back and stood, watching the storm. Approximately two minutes later, a heavy gust of wind downed one of the front glass window panels and glass shattered on the carpet close to where the customer stood moments before.

The second window then snapped, cracking the glass and it was hanging by a single wire.

The Bethlehem staff then had all customers move to the back break room area until the storm finished.

“I’m thankful that the pharmacist was quick thinking and concerned about our wellbeing,” customer Karissa Miller said. “He recognized that it was possibly a tornado and responded calmly and kept us all safe.”

After the storm had subsided, the pharmacist continued his due diligence by filling prescriptions for the customers.

He then had the customers exit out the back of the store, with their prescriptions in hand, and even offered to let an employee drive them around to the front of the parking lot to their vehicle.

Alexander County Emergency Services Director Russell Greene noted that there were damage reports from Shiloh Church Road, Skyline Drive, and Havenhurst Road, with the worst damage being to the Bethlehem Pharmacy, as mentioned above. He also noted there were, thankfully, no injuries reported.

NC 127 in Bethlehem was closed about 3 hours Tuesday evening due to utility poles and lines down blocking travel.

Deputy Fire Marshal Mark Earle was on scene Wednesday morning, traveling with a County Building Inspector to assess home damage. Some 6-8 homes are known to have significant tree damage at present.

National Weather Service meteorologist Steve Wilkinson, from the NWS Greenville-Spartanburg office, is on the scene Wednesday morning to survey damage from the storm.

Several residents shared storm damage photos with The Times; these are found on our Facebook page, www.facebook.com/taylorsvilletimes, and below. 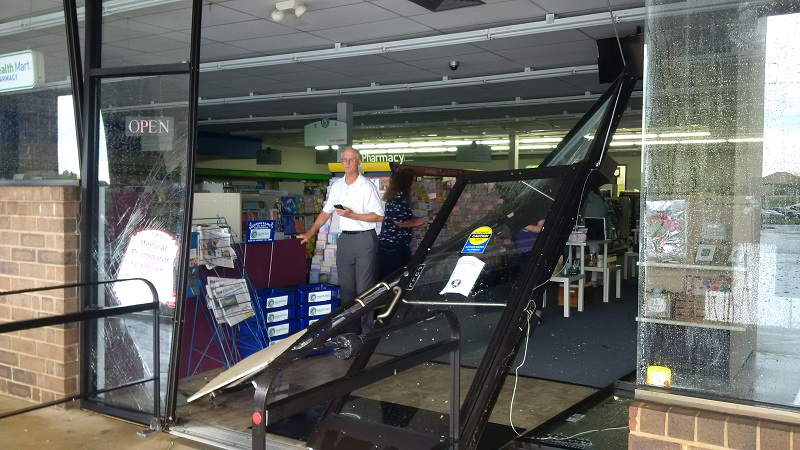 STORM DAMAGE — There were several reports of trees and power lines down in the Bethlehem Community of Alexander County, including on NC 127 near EMS Station 2 and on Shiloh Church Road, as well as Rink Dam Road, Skyline Road, and elsewhere, on Tuesday afternoon, Aug. 13, 2019, due to storm damage. The front glass entrance doors were blown out of Bethlehem Pharmacy, shown above, where pharmacist Gary Sain brought customers out of harm’s way. (Photo courtesy of Karissa Miller.) 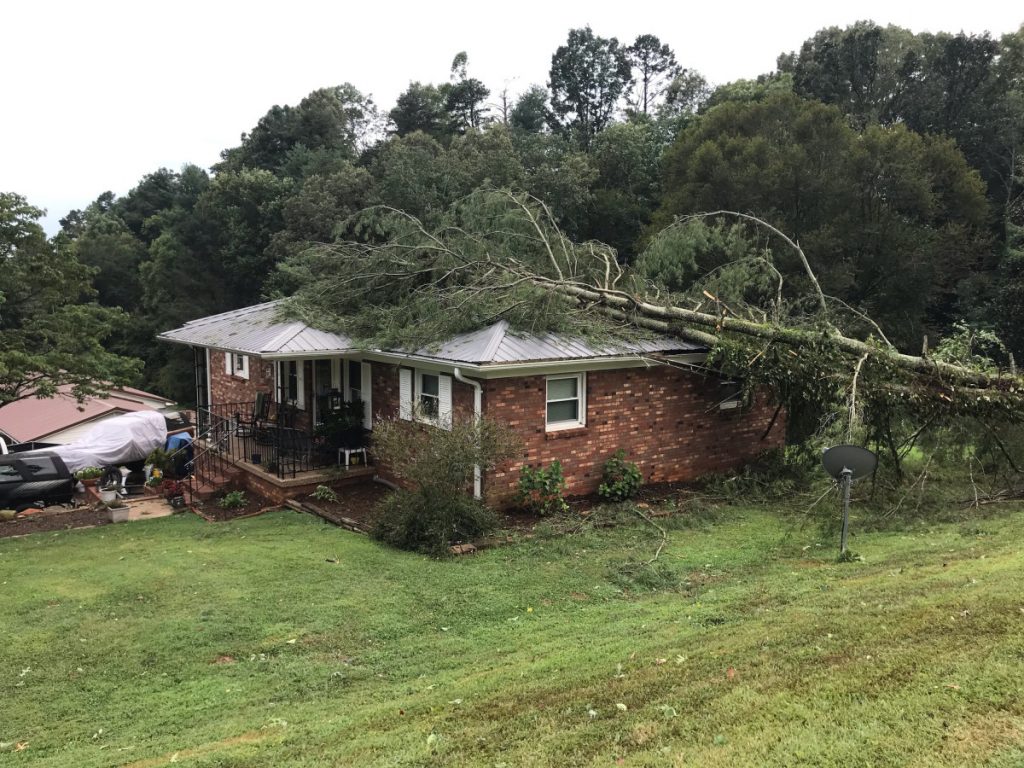 Trees fell on the home of Beth White and Joel Kerley on Valley Road in Lakemont Park, in the Bethlehem Community. Their house was among several other area homes with storm damage Aug. 13, 2019. 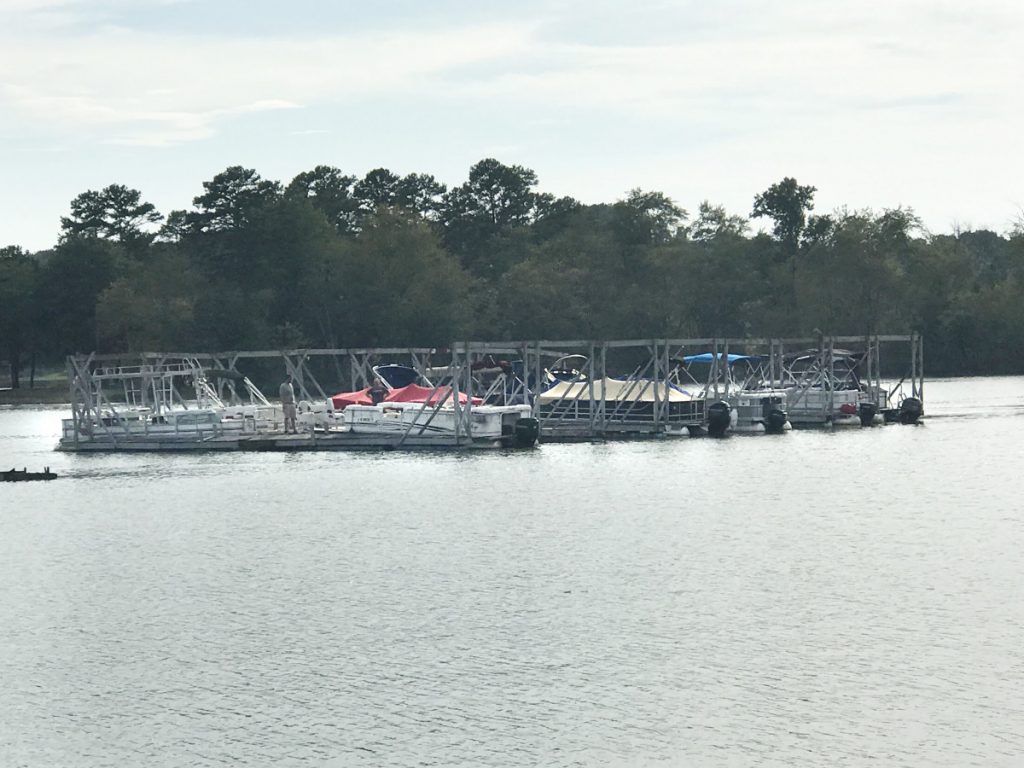 A portion of dock and several boats broke loose from Lakeside Marina during the storm. The boats are shown above floating near the Catawba County side of Lake Hickory.

This photo was taken by by Jeff Simmons on Swayngims Lane, in the Bethlehem Community, Aug. 13, 2019. 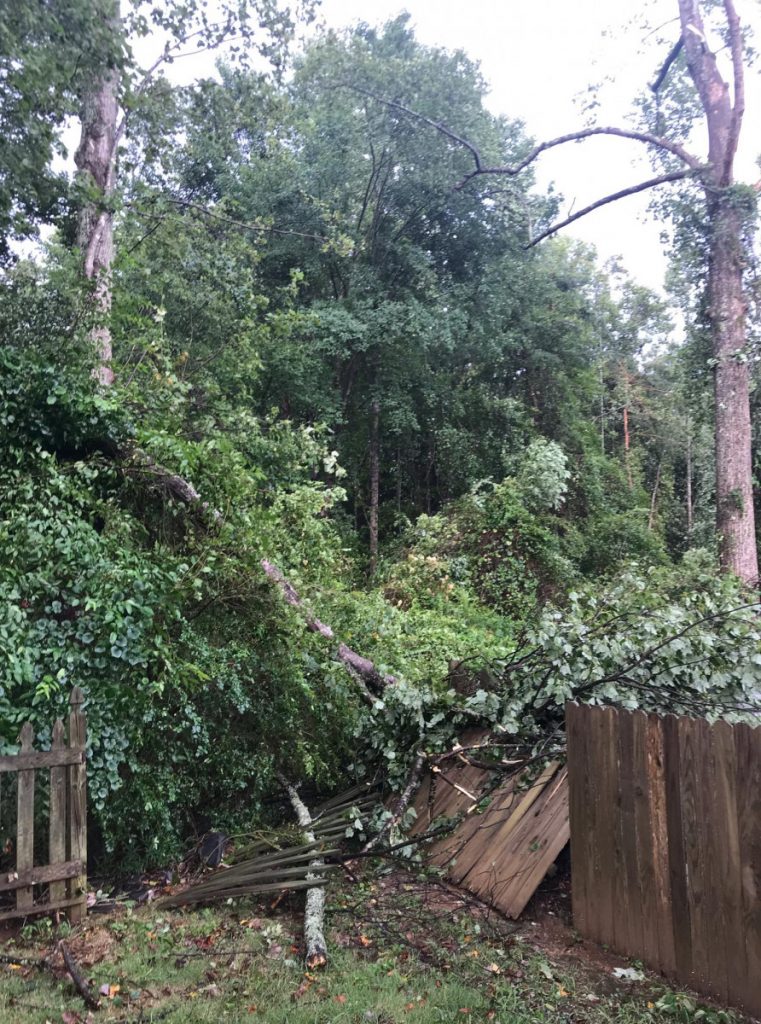 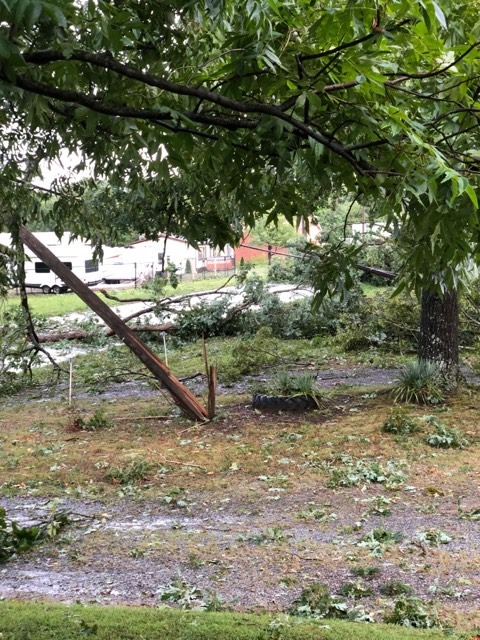 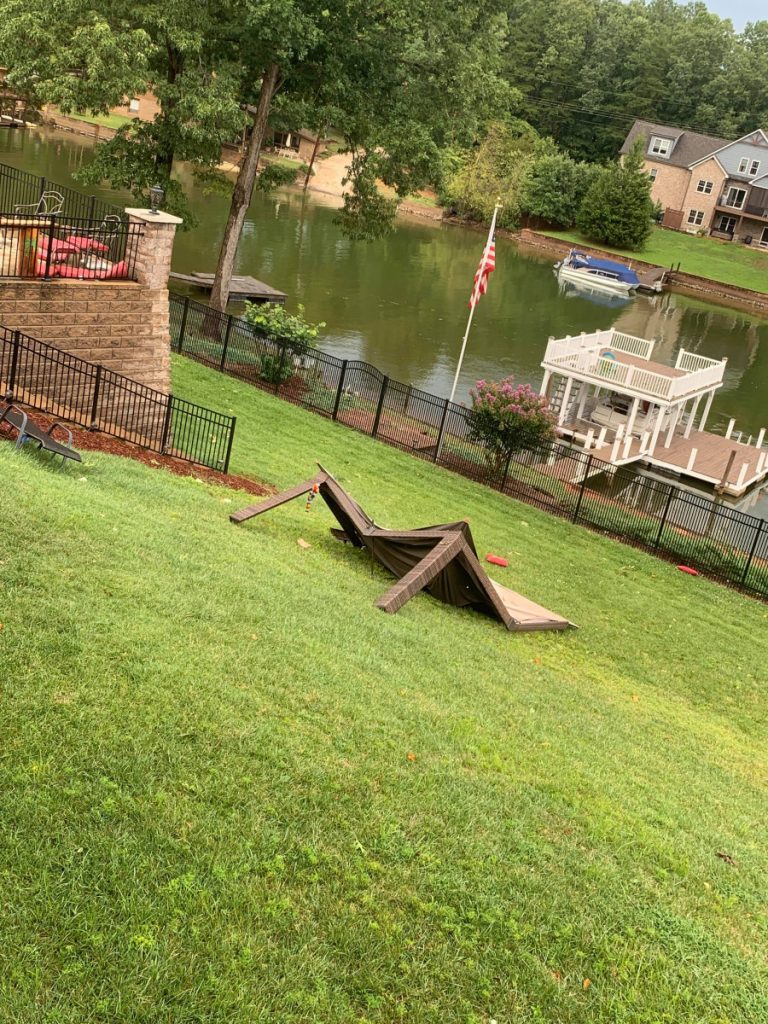 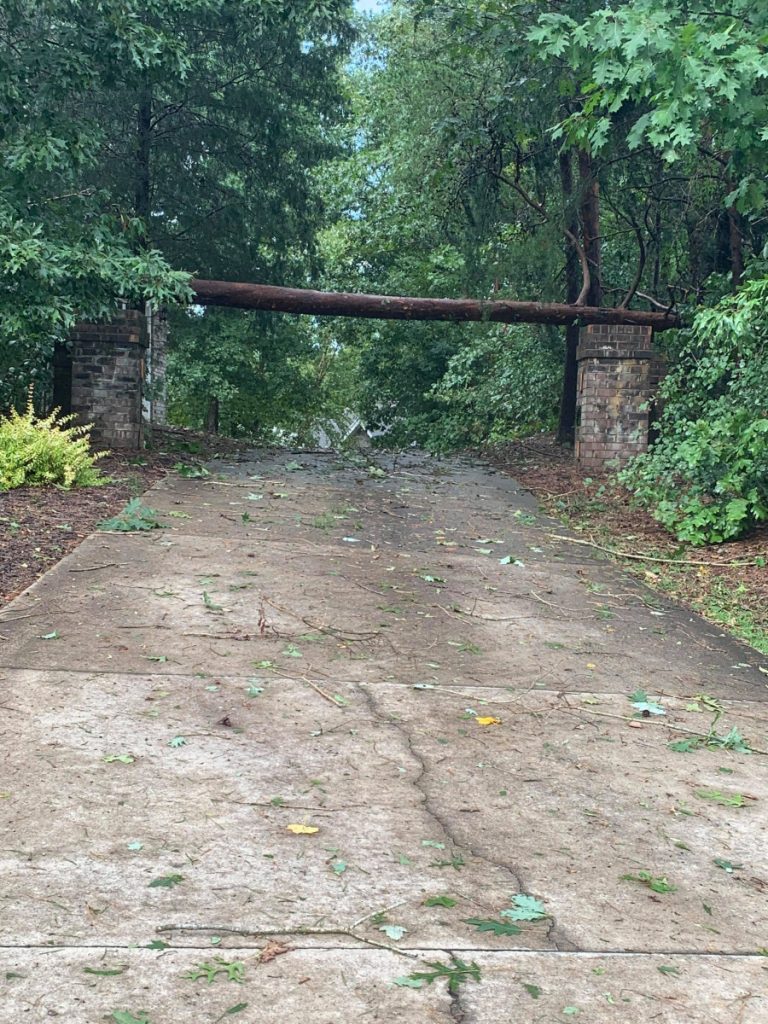 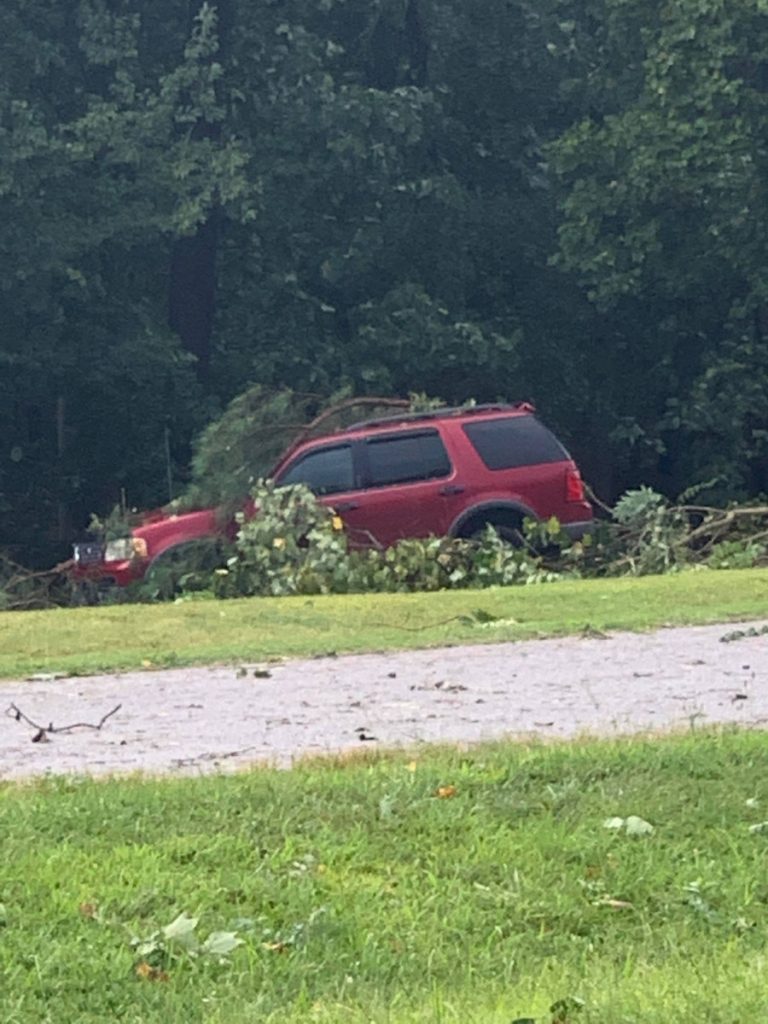