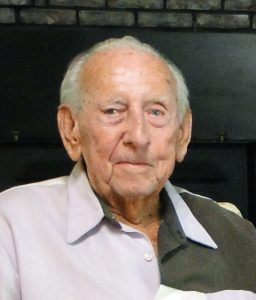 Robert Sloane Adams, 96, of Taylorsville, passed away on August 15, 2019. He was blessed to be able to live comfortably at his home for almost 97 years.

He was born on September 4, 1922, in Alexander County, to the late Robert Lee Adams and Mavis Blankenship Adams.

Including his parents, he was preceded in death by an infant brother, Olin Adams; a sister, Ethel Adams Moore; and a step-son, Rick Pennell.

Those left to cherish his memory include his wife, Louise Pennell Adams; daughter, Berenda Adams Samples and husband Ken of Taylorsville; mother of his daughter, Montez Chapman Adams; granddaughter, Stacy Marie Samples of Boomer; sister, Thelma Aleese Canter of Taylorsville; step-sons, Mike, Craig and Jerry Pennell; and a number of nieces and nephews.

Robert was a graduate of Hiddenite High School and a World War II Veteran of the US Army Air Force, where he served as a flight machine gun instructor. He owned Adams Insurance Agency in Charlotte, and after moving back to Taylorsville in 1975, owned Adams Pool Builders.

After he retired, he re-opened his father’s fish pond (Adams Fish Pond) and operated the pond until 2010. He made many friends throughout his long life, and especially loved his “fishing friends.” When deciding that it was time to close the pond at age 88, he said: “We want you Guys and Gals that have fished with us to know that we will miss you and remember you fondly.”

Robert loved to travel in his motorhome and enjoyed spending many winters in the Florida Keys. As he grew older, he enjoyed sitting on his deck, overlooking the pond, and visiting with family and friends. He will be deeply missed by these friends and his family.

The family wishes to thank the loving caregivers that assisted in his care so that he could enjoy staying in his home, Angela Sanders, Irene Shedrow, and Nancy Mecimore. We offer our heartfelt appreciation to his sweet nurses, Cheri, Shante, and Rachel; as well as the staff at Carolina Caring in Newton, especially Tonya and Sanford.

Visitation will be held Sunday, August 18, from 3–3:30 p.m., at Adams Funeral Home Chapel in Taylorsville. A graveside service will be held at 4 p.m., at Hiddenite Cemetery, Hiddenite. Lay Pastor George Holleman will officiate.