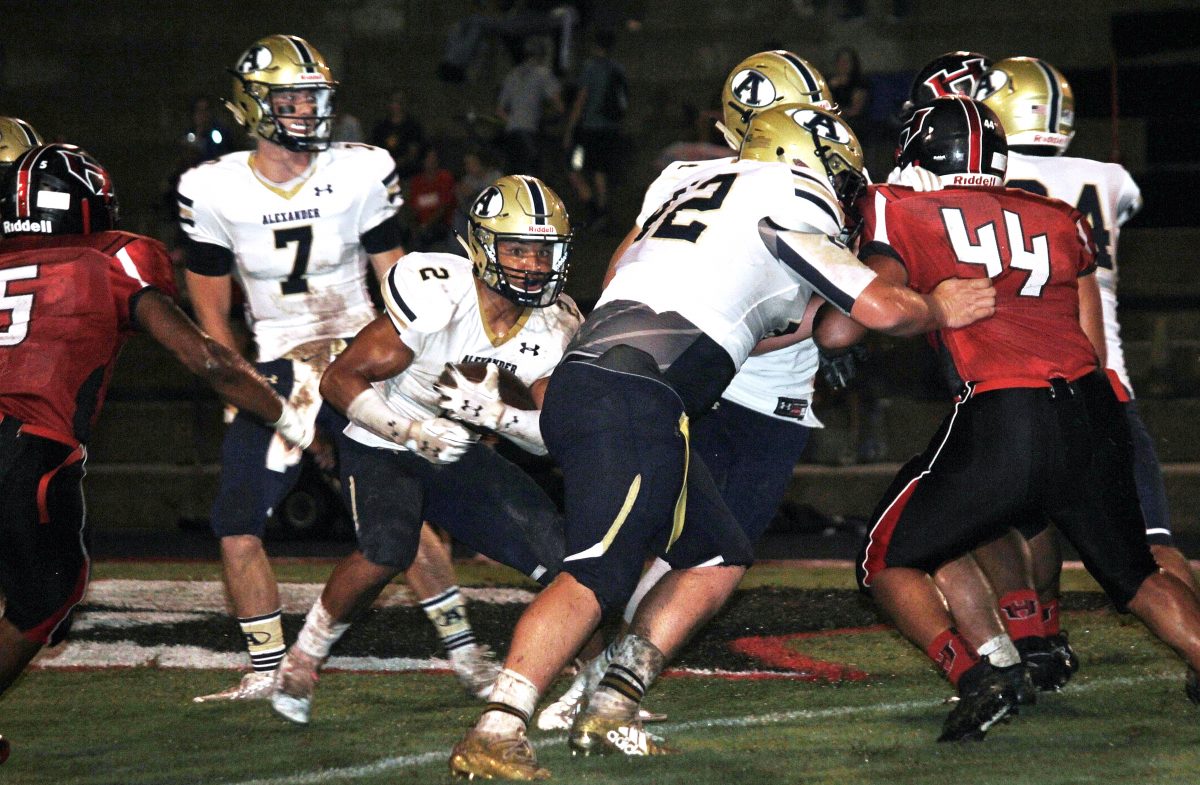 The Alexander Central Cougars rallied from an early 13-0 deficit to record a program defining 28-19 win over the Hibriten Panthers in the 2019 varsity football opener played Friday night, August 23, in Lenoir.

After waiting out a lengthy weather delay, the Cougars and Panthers took to the Jeff Storie  Memorial Stadium field more than an hour after the originally scheduled kickoff time. Once the teams took the field, they entertained a huge crowd with a showdown between two of the Unifour’s most successful programs in recent seasons. 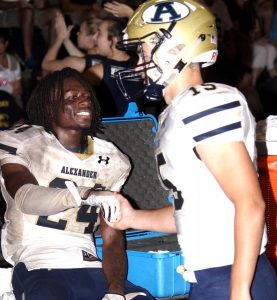 AJ Miller, left, is congratulated by teammate Colston Yount after his second quarter TD run. Miller finished with a TD and two pass interceptions in the game.

ACHS entered the game with a 19-5 record over the past two seasons under Head Coach Butch Carter. The Panthers started the Sam Mackey coaching era riding a 34-game regular season win streak and three straight Western Regional final appearances, including a 2AA state title in 2017.

The game was played on a soggy track thanks to heavy rains prior to the contest. The sloppy conditions possibly led to numerous early fumbles and miscue by each squad. Alexander moved the ball on its first two possessions before turnovers stopped drives in the red zone.

The Panthers built a 13-0 lead midway through the second period, scoring two TDs off a pair of ACHS turnovers. Hibriten got a one-yard TD run from Noah Isbell in the first period and added a 21-yard scoring pass from Darren Perry to Marcus Jones with just under six minutes to play in the first half. The scores were set up a Cougar fumble and interception.

ACHS finally broke onto the scoreboard on its next possession. The team’s first scoring possession of the 2019 season was set up by a 76-yard kickoff return by speedster AJ Miller. Miller’s exciting return gave the Cougars possession of the ball at the Hibriten 20-yard line. Six plays later, Miller reached the end zone on a seven-yard scamper to paydirt. Oscar Lopez’s PAT kick was good and Alexander trailed 13-7 at the half.

The second half belonged to the Cougars as the visitors from Taylorsville outscored the Panthers 21-6 over the final two stanzas.

Alexander’s first lead of the night came on a five-yard quarterback keeper by Lance Justice. The Justice scoring run capped an eight-play, 51-yard march on Alexander’s first possession of the second half.

The two teams exchanged turnovers with fumbles on back-to-back plays near the end of the third period. The Panthers’ managed to take advantage of the Cougar miscue when they took advantage of a short field with a go-head score with just 23 seconds to play in the third. Noah Isbell capped a 28-yard Hibriten drive with a one-yard plunge into the endzone. Isbell’s second TD of the night gave the Panthers a 19-14 lead as the game went to the fourth period.

The home team’s lead was short-lived. Alexander roared back on its ensuring possession and Steven Montgomery led the charge. The senior running back wowed the crowd with an electrifying 76-yard scoring run on the initial play of the game’s fourth period. Montgomery’s highlight reel touchdown put the Cougars back in front for good at 21-19.

Montgomery seized control of the game in the fourth and put an exclamation point on the win with 5:24 to play in the game. The Cougar workhorse, who finished with 211 yards on a game-high 24 carries, added a one-yard insurance touchdown to close the scoring at 28-19.

Alexander’s defense sealed the win in the late stages when seniors Bryson Abernathy and AJ Miller recorded pass interceptions to thwart Hibriten possessions. For the game, Abernathy and Miller had two interceptions each as ACHS forced five Panther turnovers. Ibrahim Boston recovered a fumble for the Cougar defense. 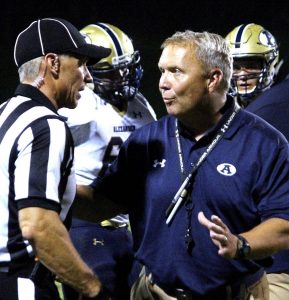 Friday’s win marked the 131st career victory for Head Coach Butch Carter. The win came on the same field where Carter recorded his first career coaching victory in 2001. Carter’s 2001 South Caldwell squad topped Hibriten 23-16 on September 7, 2001. The win was the first of 104 victories Carter’s South Caldwell teams would amass during his 15-year tenure in Sawmills.

Wet field conditions led to seven Alexander Central fumbles. The Cougars lost three of the fumbles and had one interception to finish the game with four total turnovers.

In his second career start at quarterback, Justice ran for 41 yards, including a key third-period touchdown.

The Alexander win was the 20 for the Cougars in the program’s last 25 games. It also marked the fourth straight opening night win under Head Coach Butch Carter since the coach came to Taylorsville in 2016.

Friday’s win marked  the 131st career victory  for Head Coach Butch Carter. The win came on the same field where Carter recorded his first career coaching victory in 2001. Carter’s 2001 South Caldwell squad topped Hibriten 23-16 on September 7, 2001. The win was the first of 104 victories Carter’s South Caldwell teams would amass during his 15-year tenure in Sawmills.