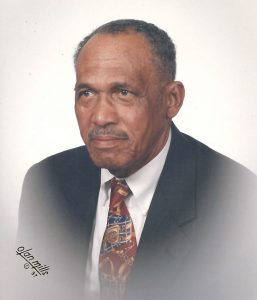 Born May 1, 1923, in Alexander County, he was the son of the late Ed Wellman and Lucille Jones (Wellman) James. He was a member of Macedonia Baptist Church in Taylorsville, where he severed as an usher, a member of the Men’s Choir, and Sunday school teacher.

Roland served proudly in the U.S. Army, where he received several meritorious service medals and commendations for his service in the Pacific Fleet Campaign doing the Second World War. His duty stations included Pearl Harbor, Hawaii, Guam Island, The Battle of Okinawa, and the Japanese Surrender at Tokyo Bay, Japan, in 1945.

After returning from the Military service, Roland worked in the furniture industries for the next 25 years. He then became an entrepreneur and opened the Wellman Janitor Service, which he operated until the age of 75. Still eager to work and contribute to his community, he went back to work again, part-time, at the Alexander County Landfill until he reached the age of 90.

A public viewing will be held Thursday evening from 6:00 to 8:00 p.m. at Adams Funeral Home, where the family will receive friends. The Celebration of Life service will be held at 2:00 p.m., Friday, August 30 2019, at Macedonia Baptist Church, 1451 Highway 90, Taylorsville, officiated by Reverend William Ro. Brown and assisted by Reverend Macy Jones. The burial will follow at Macedonia’s Church Cemetery.

A special thank you to the doctors, nurses, chaplains, and staff at Iredell County Hospice, in Statesville, for their loving care and strong support. Also, the family would like to extend their sincerest gratitude towards all loyal and loving care givers who cared for our father over the years.

Adams Funeral Home and Cremation Services is honored to be serving the Wellman Family.