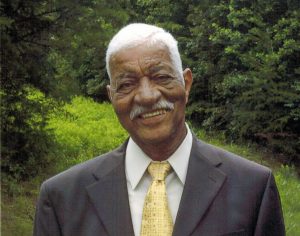 He was born in Alexander County on November 5, 1940, and was the son of the late Troy Lee Linney and Nettie Morrison Linney. He was married to Joan Edwards Linney, who preceded him in death.

He was a high school graduate and also received his BS Degree in Agricultural Economics from A and T State University. He worked as a Parole Officer with the Criminal Justice System while in New Jersey. At one time, he was also employed by Beck Corporation, Hertz Corporation, and the Veterans Administration.

He served with the US Army and was honorably discharged and was also military retired. Wade joined Smith Grove Baptist Church at an early age and was presently attending Derita Baptist Church in Charlotte.

He leaves to cherish the memory of his life, his son, Wade Franklin Linney, Jr. of Charlotte; two daughters, Nella Redmon Miller of Hiddenite, and Cicely Linney of Yonkers, New York; a grandchild, Sasha Linney of Yonkers, New York, whom he loved dearly; his siblings, Tommy Linney of Taylorsville, Shirley Rowe of Taylorsville, Dorothy (Leroy) Sellers of Harrisburg, Kerley Linney of Sacramento, California, and Nellie Allen of Upper Marlboro, Maryland; a sister-in-law, Margaret Linney of Statesville; and a host of nieces, nephews, cousins, other relatives, and dear friends.

Celebration of Life Services will be conducted Sunday, September 8, 2019, at Smith Grove Baptist Church in Hiddenite, at 2:00 p.m., where Reverend William Little will be doing the eulogy. Members of the family will receive friends prior to the service from 1 p.m to 2 p.m. Burial will follow in the Church Cemetery with full Military Rites.

Visit the Book of Memories for Mr. Linney at www.rutledgeandbigham.com. Rutledge and Bigham Funeral Home is serving the Linney Family.