Veteran raised first US Flag over Hawaii as it became state

It was sixty years ago this summer that US Air Force veteran Allie “Ray” Lovette helped usher in Hawaii’s new era — one of statehood.

On Thursday, August 29, 2019, sixty years and eight days after he raised the flag over Hawaii, Ray was honored with a pinning ceremony at Valley Nursing Center in Taylorsville to commemorate that day back in 1959.

Ray’s wife, Betty, welcomed the roomful of people to the facility. She turned the floor over to retired Alexander County Register of Deeds and USAF veteran, Ben Hines.

Hines gave a welcome and introduced Col. Tim Herndon, US Marine Corps veteran, who was on hand to represent Carolina Caring and the Veterans Administration.

Col. Herndon noted that Ray served as an Air Police (AP) member, and had extreme responsibility and some hardship in keeping the air bases safe.

Herndon presented Ray with an American Flag pin and certificate to mark the occasion, and bestowed an Angel Pin upon Betty Lovette, for her work as her husband’s caregiver. 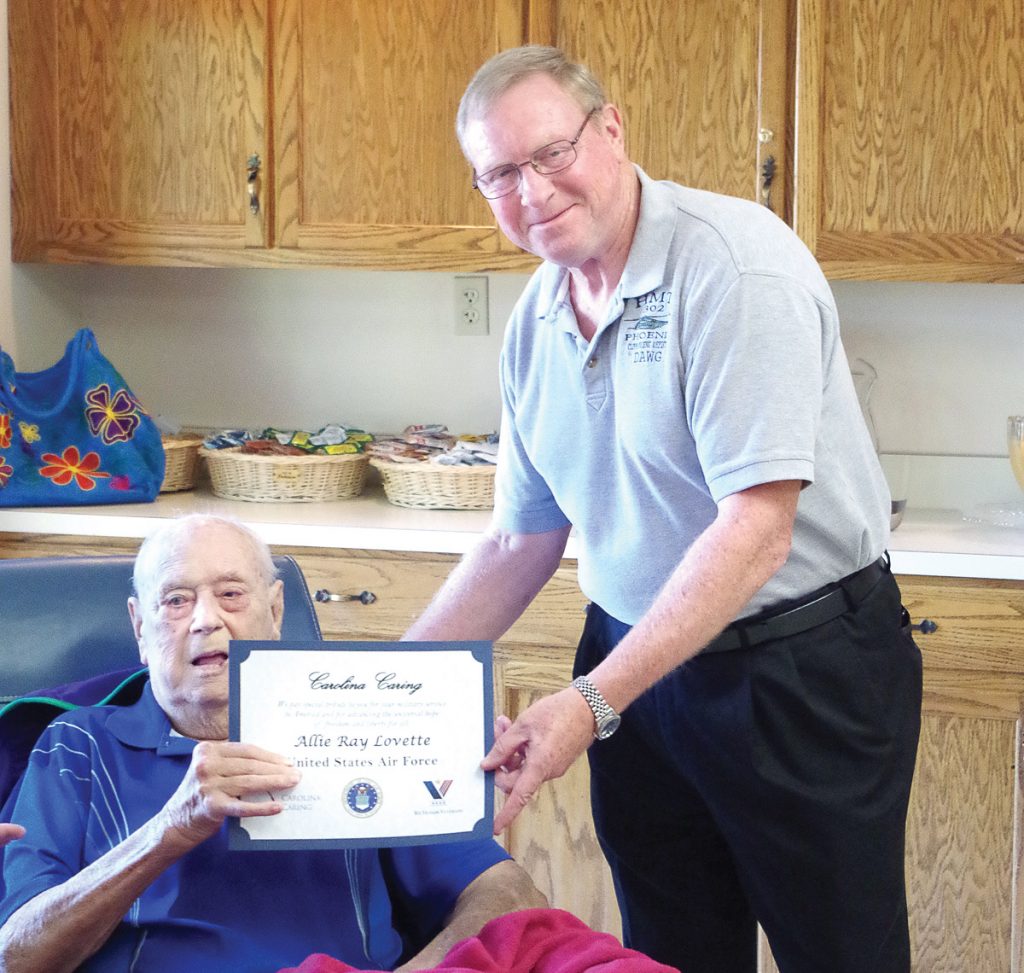 RAY LOVETTE HONORED — Above, US Air Force veteran Allie Ray Lovette, seated, accepts a certificate and pin from Carolina Caring and Veterans Administration volunteer Col. Tim Herndon, US Marine Corps veteran, on August 29, 2019, at Valley Nursing Center in Taylorsville. Lovette was
stationed in Hawaii in the summer of 1959 and raised the U.S. Flag on the day Hawaii officially became a state, August 21, 1959.

Betty Lovette noted that Ray came back to this area from service in 1960 and eventually worked 47 years for the family business, Holly Farms (bought by Tyson in 1990), with cousins Blake, Pete, and the late Bonnie, Billy, Fred, Rex, and Gene Lovette. Pete and Blake are the only living children of C.O. Lovette, whose local poultry business led to the family’s path to starting Holly Farms. The firm employed thousands of people in Wilkes and surrounding counties through the years. Poultry processing operations continue under the Tyson brand today.