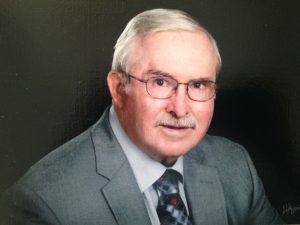 Born to Jay William Wilson and Janie Mae Wilson on January 11, 1940, Glenn grew up in Marion. He attended Marion High School, where he starred as guard and linebacker on the Rippers’ championship football teams of ’57 and ’58. After graduating in ’59, Glenn attended Appalachian State University on an athletic scholarship. He played football for the Mountaineers for four years, before taking a degree in Physical Education.

Through his work ethic, inspired leadership, and inventive strategies, the football program flourished through Wilson’s twenty-five-year career. Compiling his 149 wins (against 114 losses and 6 ties), Coach Wilson won nine conference titles, earned coach-of-the-year honors five times, and coached on the staff of the 1973 East-West All Star Game. In 1983, he led the Cougars to their only undefeated season.

To honor his stellar career, in 2011 Alexander Central named the field at Cougar Stadium The Glenn G. Wilson Field. In 2013, Wilson was inducted into Alexander County Sports Hall of Fame.

Coach Wilson believed that football was more than just a game; it was an arena where young men could develop virtues that would guide them through life: discipline, fortitude, courage, intelligence, the ability to work well with others. And Coach Wilson valued academics as much as he did athletics. He was constantly checking on his players’ grades, and he made it clear: if you want to play for your coaches Friday night, you’ve got to work for your teachers the other days.

That Wilson’s players from decades ago continued to stay in touch with him is a testament to his influence. He often exclaimed to the Cougars before each game, “If I could play, we’d win.” Such was his passion, the players believed him fully. Yes, if this forty-something-year-old man could strap on the helmet again, he would block holes big enough for a truck to drive through. No wonder decades of Cougars played out their hearts for this man.

But while Glenn poured his own heart into his coaching, he put just as much energy into his family, who got to enjoy his softer side. He had a rambunctious sense of humor, he was a great dancer, and he could do a spot-on Elvis impersonation. (One of his favorite memories was hitchhiking from Marion to Asheville, in ’56, to see the King.) He was one of those rare men who could balance strength with gentleness. His favorite Elvis song: “Teddy Bear.”

Glenn G. Wilson was preceded in death by his parents and his brothers, Donald Wilson and Howard Wilson.

A funeral service in Glenn’s honor will be held on Wednesday, September 11, at 3 p.m., at Christ Lutheran Church, 324 Second Avenue SE, Hickory, NC 28602. Burial will follow at Woodlawn Memorial Gardens in Hickory. The family will receive friends prior to the service from 1-3 p.m. at the church.