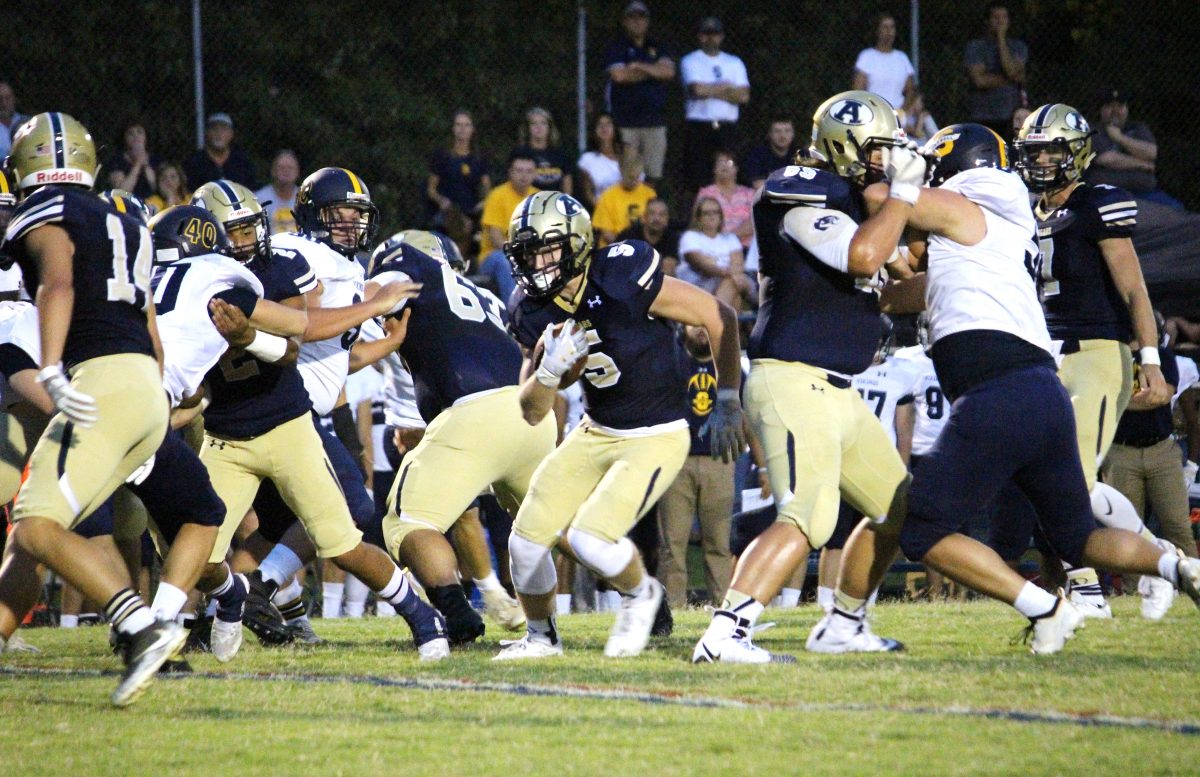 One week after a disappoint collapse and a loss to Statesville, the Alexander Central Varsity Football Team rebounded in a huge way with a dominating 48-7 win over the South Iredell Vikings on Friday evening, September 13, at Cougar Stadium in Taylorsville.

Playing six days after the death of the coach for which the Cougar Stadium playing field is named, Glenn G. Wilson, the 2019 Cougars honored the former ACHS mentor with its most impressive outing of the season.

The Cougars raced to a 35-0 lead and led 42-0 early in the third and this time, unlike one week earlier against Statesville, Alexander made the lead stand up.

Each team tallied another score later in the contest to close the scoring at 48-7 in favor of the home-standing Cougars. Alexander’s win was the program’s third in 13 meeting with the South. Prior to Friday, the Vikings led the series 10-2.

Alexander, which upped its record to 3-1 with the win, jumped in from less than one minute into the game. The Cougars kicked off to open the game and when the Vikings failed to secure possession of the kick, ACHS recovered the ball at the South 29-yard line. After a wild scramble for possession, Alexander’s Daniel Morgan came away with the ball to set up the Cougar offense. 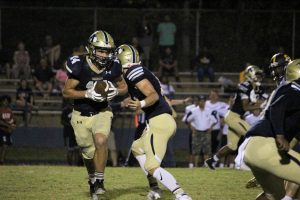 Three plays later, the Cougars scored their first touchdown of a seven-TD evening when Jamison Benfield ran into the end zone from one yard out, The PAT put the home squad in front 7-0 just 50 seconds into the game.

After forcing a three-and-out on South’s first possession, the Cougar offense was back in business again just minutes later. ACHS drove 62 yards on its second possession and scored when Benfield darted into the south end zone of Cougar Stadium for his second score of the game. Benfield’s two-yard run, and Oscar Lopez’s extra point kick put the Cougars in front 14-0 midway through the first period.

Early in the game’s second period, Alexander’s leading rusher through the first four game of the season, Steven Montgomery, got the Cougar fans excited when he erupted for a 39-yard TD run. The run and extra point allowed the Cougars to build their cushion to 21-0 less than a minute into the second stanza.

With their backs pressed tightly to the wall, the Vikings needed to respond, and South moved deep into Cougar territory and looked to finally get onto the scoreboard before Alexander’s defense responded to thwart the march.

Facing a fourth-down-and-two at the Cougar two, South Iredell mishandled the snap resulting in a fumble and a one-yard loss. The play ended the Viking series and the Cougars retained possession at their own three-yard-line.

From there, ACHS needed just two plays to move 97 yards for its fourth touchdown of the first half. Steven Montgomery set up the short scoring drive with a 66-yard explosive run down the left sideline. Moments later, AJ Miller hit pay dirt as he returned to the ACHS lineup from injury. Miller, who missed the Statesville contest with an ankle injury, scored on a 26-yard run to the end zone. After Lopez’s PAT kick, the Cougars led 28-0 with 8:50 to play in the first half. 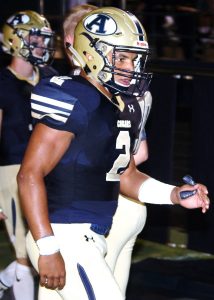 Steven Montgomery ran for 192 yards on 11 carries for a 17.5 yard average against South Iredell.

South again moved into ACHS territory on its next possession, but the Cougars again rose to the occasion on defense. This time, ACHS forced a fumble and came away with a recovery at its own 24-yard line. On a third-down play from the ACHS 18-yard line, South Iredell fumbled the ball and Ryheem Craig recovered the ball at the Alexander 24.

Following the Viking turnover, the Cougars moved 76 yards for their fifth touchdown. Miller capped the nine-play drive with a nine-yard jaunt to the end zone. The PAT gave the Cougars its 35-0 lead at the intermission.

Dayente Calhoun’s one-yard TD on Alexander’s first possession of the second half put the Cougars in front 42-0 less than four minutes into the third period. The 42-point lead forced a running clock according to the NCHSAA mercy rule.

From there, each team scored a one touchdown to close out the game. South’s Bryce Klinger scored the Vikings’ lone TD on a quarterback sneak for one yard late in the third.

In the fourth period, ACHS added one more score when Daniel Morgan scored on a three-yard run with 7:50 to play in the game. Morgan’s carry capped Alexander’s final scoring drive which covered 72 yards in six plays.

South Iredell’s final possession of the game came to an end with an Alexander Central interception to cap off the Cougars’ overall domination. Peyton Payne intercepted a Klinger pass on the game’s final play to end the one-sided Cougar win.

The game saw Alexander Central dominate the scoreboard and the stat sheet. The Cougars ran for 430 yards on the ground and added 31 passing yards for a 461-yard total. South Iredell finished with 53 rushing yards and 256 total yards of offense in the loss.

For the fourth straight contest, Montgomery led the rushing attack for Alexander. The senior back ran 11 times for 192 yards and averaged 17.5 yards per carry. With the effort, Montgomery upped his season total for rushing yardage to 701 through four contests.

Through the air, Lance Justice hit on two of three passes for 31 yards, including a 16-yard completion to Calhoun and a 15-yarder to Benfield.

Klinger led the Vikings with a nine-for-10 passing night for 160 yards.

Defensively, ACHS was dominant from start to finish. The Cougars forced two turnovers in the game and held the Vikings to five yards per play.

The Cougars will remain at home for their final non-conference game on Friday, September 20, when they host Olympic High School from Charlotte. Friday’s game will be the second all-time meeting between the two schools. The Cougars lead the series 1-0 with a playoff win over the Trojans in 2004.

Friday’s game versus Olympic will kick off at 7:30 pm at Glenn Wilson Field at Cougar Stadium. 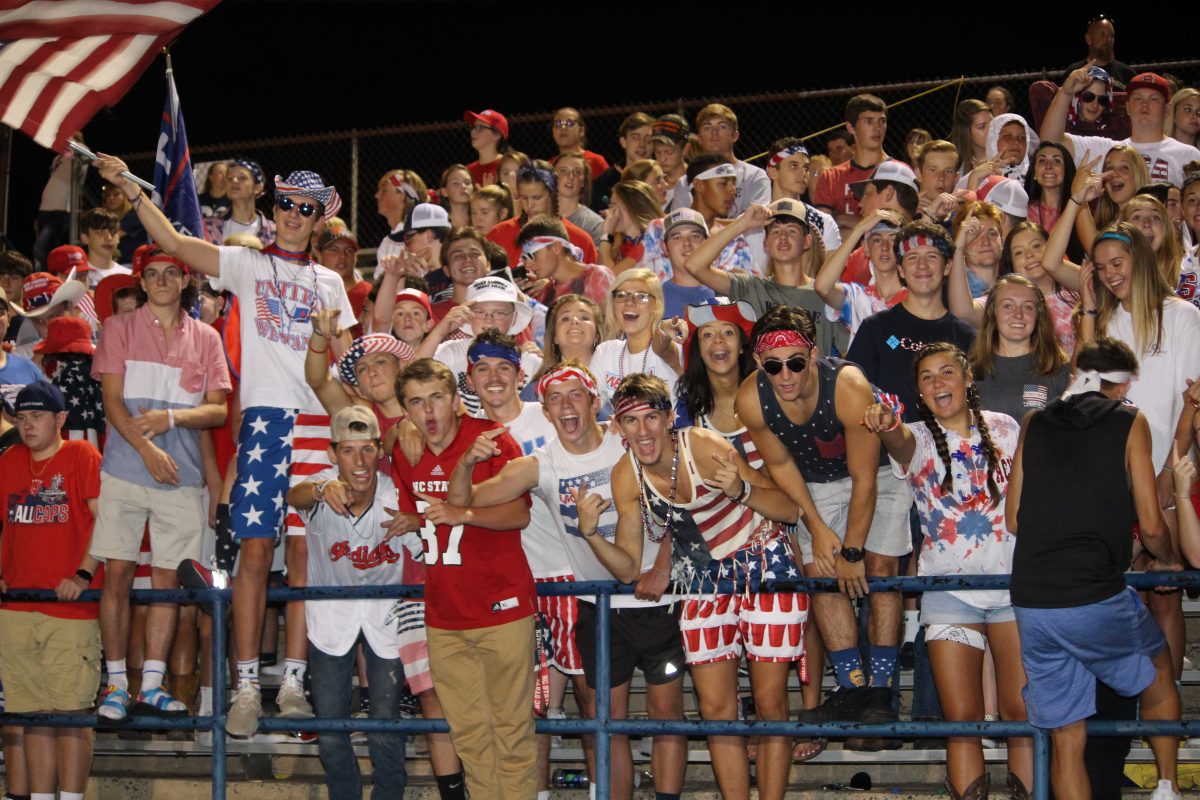 The ACHS Student Section shows off its pride on Military Apprecation Night.