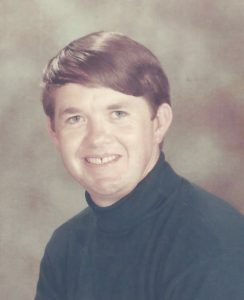 Herman Floyd Deal, 76, of Johnny Wike Road, Taylorsville, passed away on Monday, September 16, 2019 at his residence.

He was born October 10, 1942, in Alexander County, the son of the late Jones Franklin Deal and Vada Jenetta Bentley Deal.

He was a US Navy veteran and a lifetime member of Salem Lutheran Church. He worked as a press operator for 33 years at Rock-Tenn and was also a farmer, helping his Dad with the apples, tobacco, and cattle. He was a loving, hard-working husband and father, always wanting to include his family with his activities. He enjoyed drag-car racing and riding the Harley motorcycle. He was an avid Green Bay Packer fan.

Including his parents, he was preceded in death by two sisters, Beulah Helm and Margie Hall, and a brother, Raymond Deal.

Those left to cherish and honor his memory include his wife of 49 years, married on August 15, 1970, Carol Bentley Deal of the home; two daughters, Monica “Molly” Jean Deal of Taylorsville, and Wendy Mayer and husband Luke of Elizabeth City; a son, Joshua Franklin Deal of Taylorsville; a grandson, Nikolaus Mayer; numerous nieces, nephews, and cousins, and Molly, his special furry friend.

The funeral service will be held at 2 p.m., Saturday, September 21, 2019 at Salem Lutheran Church. Pastor Reed Shoaff will officiate. Burial will follow in the church cemetery with full military honors accorded by Alexander County Veterans Honor Guard. The family will receive friends one hour prior to the service.

Memorials may be made to: Salem Lutheran Church Building Fund or Cemetery Fund.