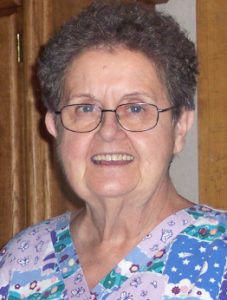 Alice Elder Buck, 83, of Jacksonville, Florida, passed away on Thursday, September 19, 2019, at her home in Jacksonville.

Born February 1, 1936, she was the daughter of William Curtis and Blanche Burgess Elder. Alice was a graduate of Taylorsville High School, class of 1954.

Alice is survived by a son, Joel Chavous of the home; a grandson, Brooke Chavous; and a granddaughter, Christina Chavous of Augusta, Georgia; and their mother, Pam Chavous. She is also survived by sisters, Jayne E. Goble (Elbert) and Connie E. Bryant (Randy) of Taylorsville; and her brothers, David L. Elder (Cindy) of Hickory, and Richard B. Elder (Joy) of Taylorsville; and numerous nieces and nephews.

She was a member of Arlington Baptist Church in Jacksonville, Florida. The family will have a memorial service at the WC and Blanche Elder Family Cemetery at Carson’s Chapel Methodist Church at a later date.