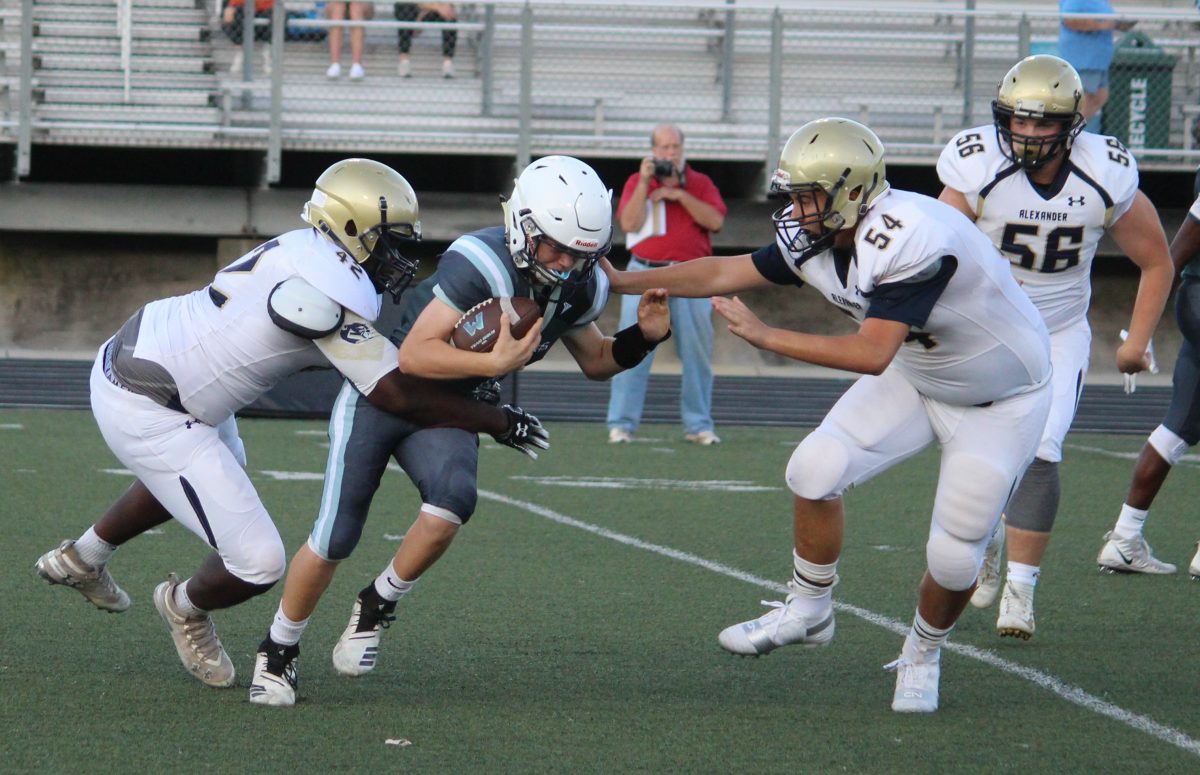 Alexander’s Zhaheim Millsaps wraps up a Watauga ball carrier for a loss as teammate Thomas Cline closes in during Thursday’s win.

Sophomore Harrison Brashear accounted for three touchdowns and passed for a pair of two-point conversion as the young Cougars improved to 5-0 on the season. The win pushed the program’s consecutive wins streak to 37 straight games.

The Cougars scored on their first five possessions of the game and built a 38-0 lead at the half. The team added one score in the second half to close the scoring with a 46-point rout. 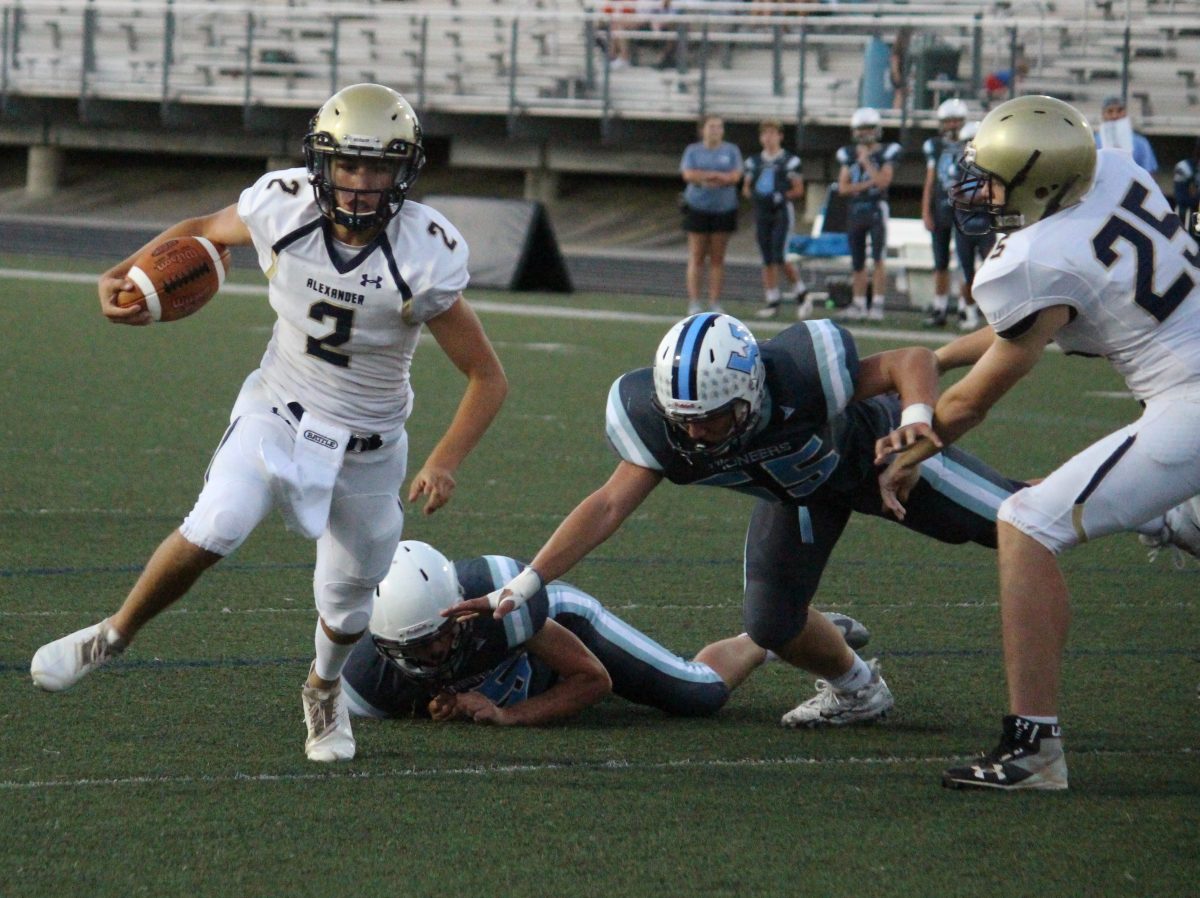 Luke Hammer eludes Watauga defenders on his way to the end zone on a two-point conversion.

After forcing a turnover on Watauga’s first possession, the Cougars drove 27 yards in four plays to score the game’s first points four minutes into the game. Brashear raced in from five-yards out to put the Cougars in front 6-0.

A 10-yard scamper by freshman QB Luke Hammer, coupled with a conversion run by Cam Lackey, put the visitors in front 14-0 at the end of the first quarter of play.

In the second stanza, Brashear and Andrew Bumgarner hooked up on an 11-yard scoring pass, while Caleb Williams and Lackey added TD runs for the Cougars. Hammer added a two-point conversion run and Brashear completed conversion passes to Lackey and Chase Bostian in the second period.

Brashear closed the team’s scoring in late in the third period when he darted to pay dirt for his second rushing TD of the night on a four-yard run. Luke Mitchell added the two-point conversion to close the score on the night.

Alexander’s defense forced the game’s only turnover and limited the Pioneers to just 75 yards on the night. Andrew Bumgarner led the Cougar defense with eight tackles on the night. Zhaheim Millsaps added six tackles with three tackles for loss.

The Cougars return home on Thursday, October 10, to host the Freedom JV Patriots at 6:30 pm at Cougar Stadium. 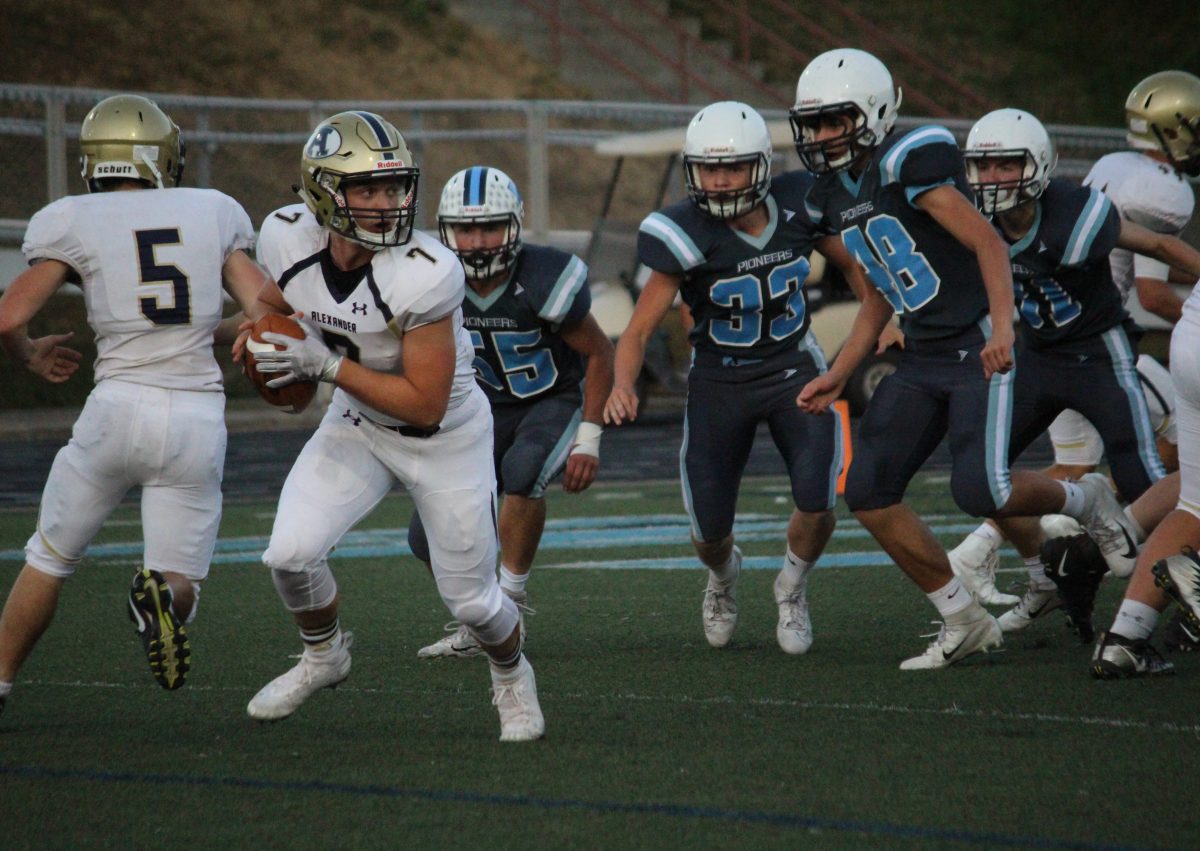 Harrison Brashear rolls out of the pocket on a pass play vs. Watauga.