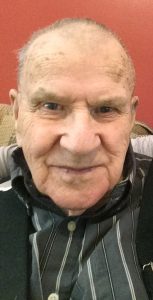 Willard Burrette Hartness, 89, of Statesville, was ready to meet his Lord & Savior on Wednesday, October 9, 2019 at Gordon Hospice House.

He was born on Saturday, September 13, 1930, in Iredell County, to the late William Ivan Hartness and Ina Durrette Marlow Hartness. Willard served in the United States Army during the Korean Conflict. He was a lifelong member of Poplar Springs Church of God.

The Funeral Service will be at 5:00 p.m., Saturday, October 12, 2019 at Poplar Springs Church of God. Burial will follow in the church cemetery. Rev. Steven Newman will officiate. Mr. Hartness will receive full military rites. The family will receive friends one hour prior to the service from 4:00-5:00 p.m. at the church.

Memorials may be given to Poplar Spring Church of God, Mountain View Church Rd., Statesville, NC 28625.

Condolences may be e-mailed to the Hartness Family by visiting our website at www.chapmanfuneralhome.com.

Chapman Funeral Home is honored to be assisting the family of Willard Burrette Hartness.