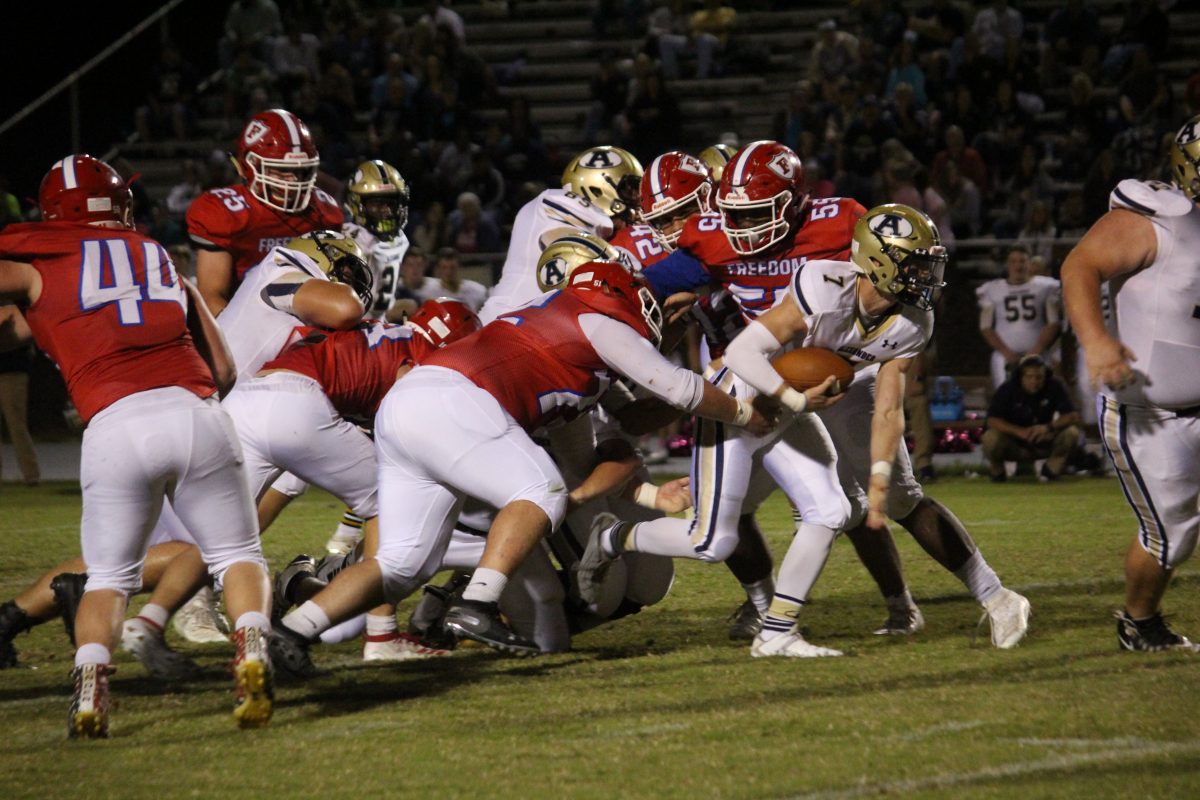 Lance Justice slips through the line for a nice gain on a QB sneak vs. Freedom.

The Freedom Patriots rallied from 17 points down in the final stages of Friday night’s game versus Alexander Central to post a 46-42 win in Morganton.

The Patriots scored 21 points in the final 5:14 to erase a huge Cougar lead in the game’s closing moments. Jayden Birchfield, the Pats’ star quarterback, passed for one TD and ran for two more in the 21-point barrage to win the game.

The Freedom comeback was aided by a pair of onside kick recoveries in the fourth period.

ACHS scored on an AJ Miller 42-yard TD reception from Lance Justice to put the visiting Cougars in front 42-25 with 9:24 to play in the game. From that point, the Pats dominated the time of possession, scoring three touchdowns and recovering two onside kicks. Freedom kept Alexander’s potent offense off the field for nearly nine minutes in the comeback stretch. 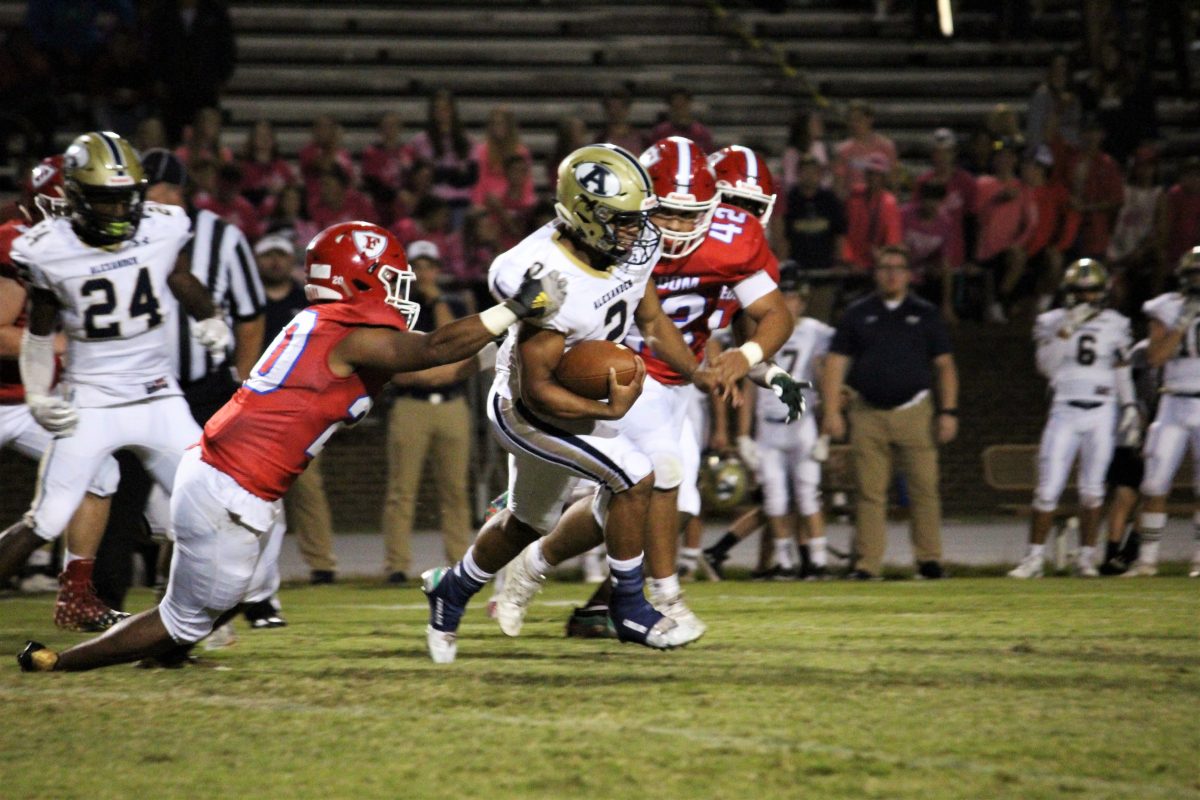 Behind three TDs from Steven Montgomery, two from Miller, and a TD catch by Blake Martin, the Cougar built its wide margin early in the fourth. However, Miller’s second score of the game in the fourth would be Alexander’s last trip into the end zone.

The Cougars held a 28-19 lead at the half. Steven Montgomery scored two rushing TDs in the first half and added a third score on an 11-yard TD pass from Justice. Miller also reached pay dirt with a 35-yard scoring jaunt in the first period.

Freedom’s first half production was dominated by the play of wideout Desmond “Mud Dog” Caldwell. Caldwell had four catches for 221 yards and three TDs in the first half of play. The speedy receiver scored on receptions of 73, 65, and 85 yards to keep the Patriots in the game.

Justice tossed a four-yard scoring pass to Blake Martin to put the Cougars in front 35-19 with 3:10 to play in the third period.

After Freedom scored another TD in final minute of the third period, the Cougars held a 35-25 lead entering the fourth stanza.

The Cougars scored their sixth TD of the night on their next possession when Justice and Miller hooked up for a 42-yard scoring play. The PAT put the Cougars in front 42-25 with 9:24 remaining in regulation.

From that point, Freedom started its comeback. With 5:14 remaining in the fourth, Birchfield tossed a seven-yard TD pass to Day Day Burgess. The two-point attempt failed, and Alexander led 42-31.

Freedom’s onside kick recovery followed to set up the Pats at midfield. Moments later, Birchfield ran the ball in from 10 yards out. The two-point run was good, and the Patriots were within three points at 42-39 with 3:54 to play.

On the ensuing kickoff, Freedom chose to attempt another onside kick and again, the Pats managed to recover the ball. The home team oved 58-yards in 10 plays to take its first lead of the night with just 26 seconds to play. Birchfield, who has committed to play at the United States Naval Academy, sprinted 12 yards to pay dirt to complete the Freedom comeback. The two-point conversion gave Freedom its 46-42 lead.

Alexander’s offense finally returned to the field but was unable to move the ball as the game clock expired and Freedom celebrated an improbable win.

The win evened Freedom’s league record at 1-1, while Alexander slipped to 4-3 overall and 0-2 in NWC contests.

Montgomery led ACHS with 18 rushes for 106 yards. With the effort, the became the 15th ACHS player to surpass 1,000 rushing yards in a season.

Through the air, Justice completed nine of 12 passes for 111 yards and a career-best three TD passes. AJ Miller led the Cougars with three catches for 57 yards and a TD.

For Freedom, Birchfield was responsible for six TDs. The senior ran for two scores and finished with four TD passes. He completed 17 of 30 passes for 355 yards to lead Freedom’s 510-yard offensive outburst. Caldwell finished the night with six catches for 234 yards and three scores.

The Cougars return home on Friday, October 18, to McDowell at 7:30 pm at Cougar Stadium. 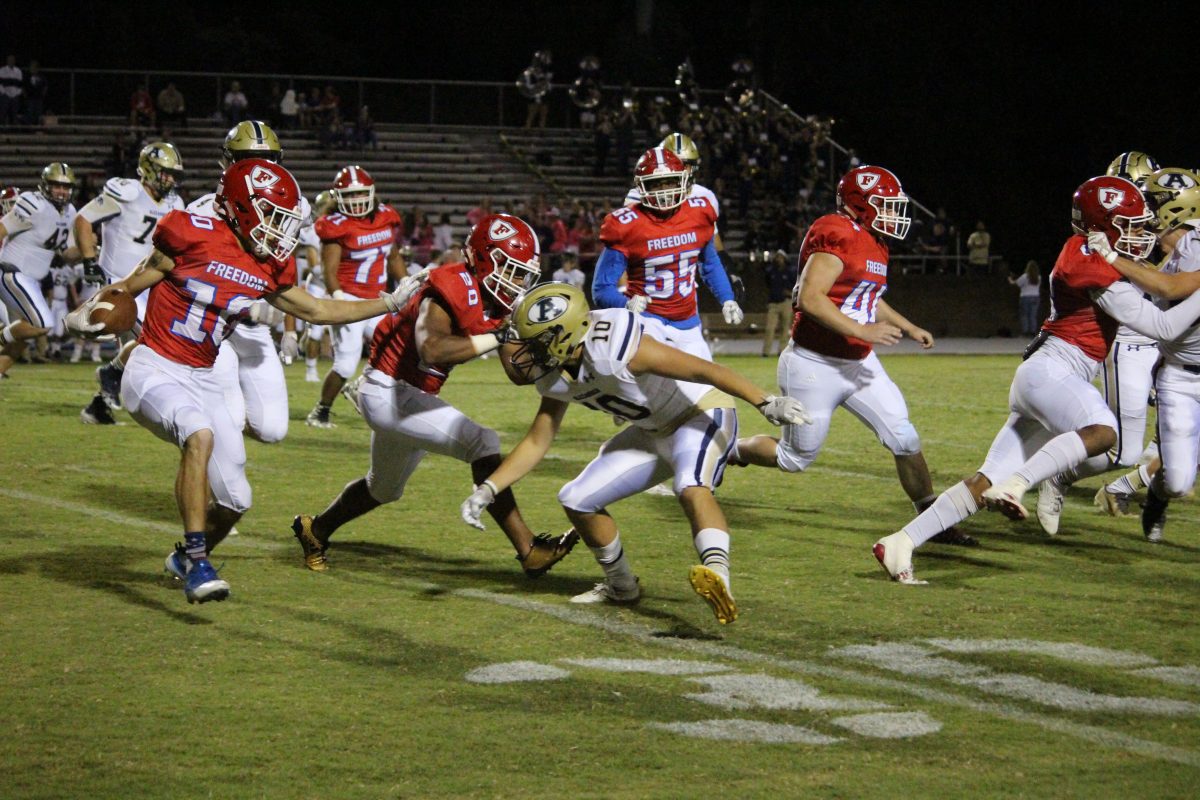 Bryson Abernathy gets past a blocker to tackle Freedom’s Desmond Caldwell.