By D.N. PENNELL, Jr. The West Alexander Middle School Football Team completed its third straight perfect season and  retained the coveted Apple Bowl trophy with its 54-6 win over East Alexander on Tuesday evening, October 15, at Cougar Stadium in Taylorsville.
Behind a four-touchdown effort from Logan Shoemaker, the Bulldogs cruised to the resounding win and upped the school’s current win streak to 19 straight games. The win also secured the third straight NW Middle School Conference title for WAMS Head Coach Brian Killian and his Bulldogs.
West Alexander built a 32-6 lead at the half and never looked back en route to its third straight victory over its cross county rival from Hiddenite. The Bulldogs needed just 1:09 to score their first TD and never trailed in Tuesday’s game. Logan Shoemaker scored the first of his four TDs in the game when he reached the end zone on a two-yard run on West’s first possession. The PAT run by Shoemaker gave West an 8-0 lead with 6:51 to play in the first period.
East Alexander managed to answer the Bulldog score with an eight-play, 60-yard scoring drive on its first possession of the game. The Falcons, which also entered the game with an unbeaten record, hit pay dirt when quarterback Tanner Moore tossed a five-yard scoring pass to Levi Brown in the south end zone of Cougar Stadium. The PAT run failed and West held an 8-6 lead with 3:15 remaining in the first period.
The East touchdown drive was highlighted by a 42-yard hookup between Moore and Brown to move inside the red zone. On the night, Moore and Brown connected on five pass completions for 73 yards. 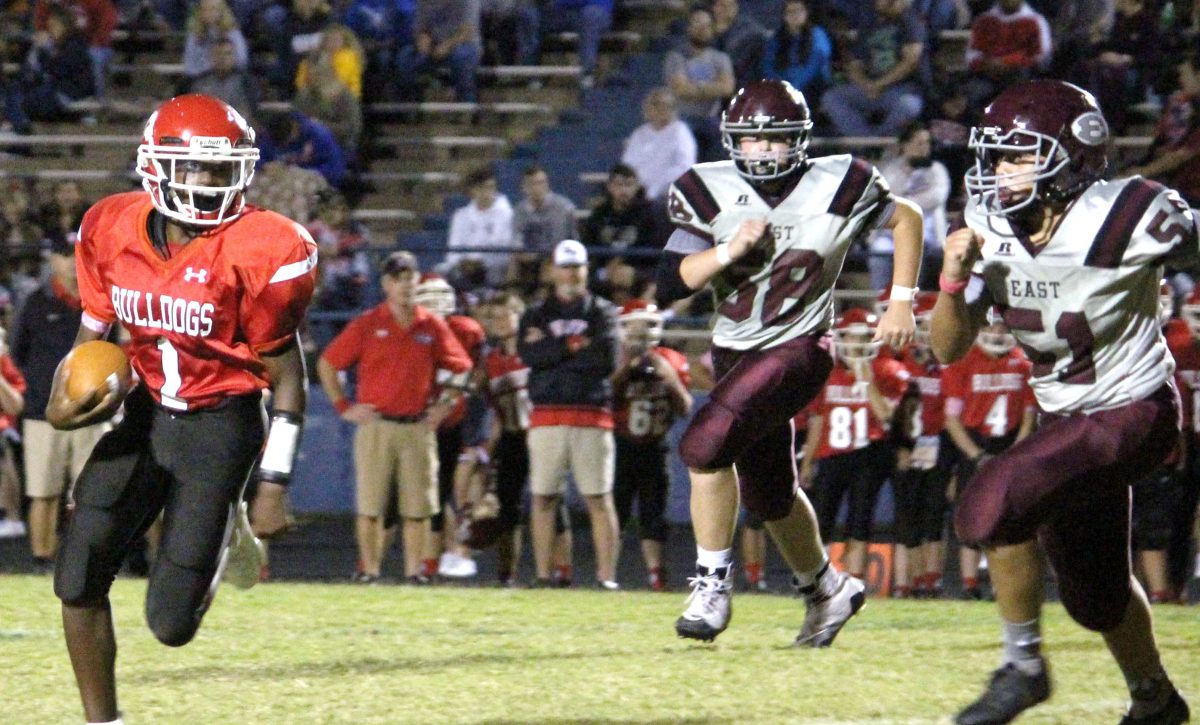 East’s touchdown marked the first points allowed by West Alexander the entire season. Coming into Tuesday’s game, West had outscored its opponents 182-0. Following the Apple Bowl victory, the Bulldogs closed the season with a 236-6 scoring margin for the season.
Following the Falcon TD, West Alexander seized control of the game and rolled off 46 unanswered points to lead the game. West closed the game with six touchdowns, including three more rushing scores from Shoemaker. 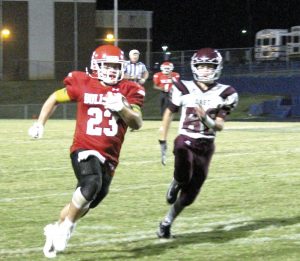 APPLE BOWL STAR – WAMS running back Logan Shoemaker (23) ran for 150 yards and four touchdowns to lead the Bulldogs to a 54-6 win on Tuesday, October 15, at Cougar Stadium.

Back-to-back scoring romps from Shoemaker gave West a 24-6 lead early in the second period. The Bulldogs added another score in the second when quarterback Braydon Rowe found a wide-open Chad Lasher on a 21-yard scoring pass late in the stanza. The TD pass, coupled with a two-point run, put West in front 32-6 at intermission.
Kenji Vang, Shoemaker, and Rowe added one scoring run each for West in the second half as the West lead ballooned to 48-points by the end of the game.
West Alexander totaled 262 yards of offense in the win, while holding East to just 93 total yards. Shoemaker ran for 150 yards to lead all offensives player. Kenji Vang added 80 ground yards for West. Braydon Rowe completed his only pass attempt for a TD and added one score on the ground.
For East, Moore completed five of 12 passes for 73 yards. Brown led the Falcons with five catches in the loss. On the ground, Jordan Dobson had 19 yards on five carries.
Defensively, Shoemaker led West Alexander with seven total tackles, while Garison Millsaps added five stops for the Bulldogs. For East, Levi Brown led the defense with four total tackles.