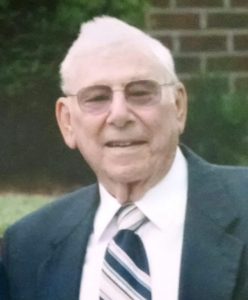 Luther Martin Cline, 93, of Teague Town Road, Taylorsville, passed away at home surrounded by his loving family on Thursday, October 17, 2019.

Luther was born May 13, 1926, in Alexander County, the son of the late Moses Uriah Cline and Naomi Ruth Austin Cline.

He was a US Navy veteran, who served during WWII on the USS Williams Naval Destroyer. He was a member of St. Stephens Lutheran Church Missouri Synod and was very active in various church groups and activities. He was a machinist and was instrumental in starting many small businesses, including Cline Machine Company.

The funeral service will be held at 3:30 p.m., Monday, October 21, 2019 at St. Stephens Lutheran Church Missouri Synod, 2259 12th Avenue NE, Hickory, NC 28601. Pastor Dave Ziehr will officiate. Burial will follow in the church cemetery with full military honors accorded by Alexander County Veterans Honor Guard. The family will receive friends from 1:30-3:15 p.m. prior to the service.

The family would like to give a special thanks to Luther’s caregivers, Stephanie, Jennifer, Tracy, and Courtney.