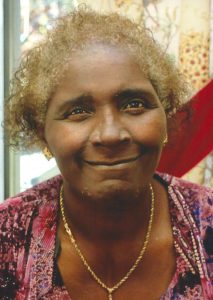 Karen Adams Blount, 67, of Spring Avenue, Taylorsville, went to her heavenly home on Sunday, October 20, 2019 at her residence.

Karen was born June 13, 1952, in Iredell County, the daughter of Elmeta Bennett Adams and the late Everette Reaford Adams.

She had worked at Schneider Mills for over 20 years and later attended CVCC and was certified as a Med-Tech. She was a member of Zion Chapel AME Zion Church. She was a devoted and loyal usher. She assisted with the children ministry and was always one that was checking and looking after others.

She loved her children, grandchildren, and especially Taia Marie Blount, whom she raised. She was a beloved member of the community, who will dearly be missed.

Including her father, she was preceded in death by two sisters, Anita Adams Nichols and Bonita Adams Taylor; a brother, Joseph Allen Adams; two nieces; and a nephew.

Including her mother, Elmeta Bennett Adams, those left to cherish and honor her memory include her sons, Etoyi Monray Blount of the home, and William DeShawn Blount and Robert Kendrick Blount, both of Taylorsville; eight grandchildren; her ex-husband, who she was married to for 40 years and the father of her children, William Blount; four sisters, Margaret Adams of Hiddenite, Frances Blount of Taylorsville, Ray-Nell Poole and husband John of Hiddenite, and Iris Bryant of Taylorsville; a brother, James Adams of Hiddenite; an aunt, Florence Wilson of Hiddenite; an uncle, Calvin Bennett and wife Willie Mae of Statesville; four nieces, including Marilyn Adams and Marissa Adams, who were also Karen’s caregivers; and special cousin, Pattie Cassell of Statesville.

The Home-Going service will be at 2 p.m., Friday, October 25, 2019 at Zion Chapel AME Zion Church. Elder David Baker will be presiding. Burial will follow in the church cemetery. The body will lie-in-state from 4-6 p.m., Thursday, October 24, 2019 at Adams Funeral Home Chapel. The family will receive friends from 1:30-2:00 p.m., prior to the service.

Memorials may be made to: Zion Chapel AME Zion Church.

Adams Funeral Home and Cremation Services is honored to be serving the Blount Family.