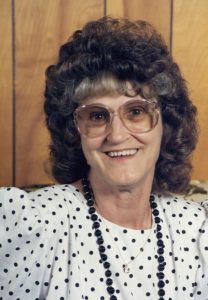 Dorthey “Dot” Susie May Bentley Connell, 86 and a half, went to be with the Lord, whom she loved so dearly, on October 27, 2019 after a period of declining health over the past few years. She passed peacefully in her sleep at Valley Nursing Center, where she had been a resident for less than a week. She was the daughter of Daniel and Katie Loudermilt of Taylorsville.

Dorthey was preceded in death by her loving husband and the father of her four children, James William Bentley; her son, Jimmy Dale Bentley; her second husband, Robert “Bob” Connell; two sisters; a brother; and a son-in-law.

Those left to cherish and honor her memory include her son, Danny Michael Bentley and wife Pam of Claremont; and daughters, Juanita Gayle Bentley Deal of Conover, and Sheila Bentley Bailey, as well as Terry “Mac” McLaughlin of Nebo. Dot is survived by five grandchildren and numerous great-grandchildren as well as five sisters, a brother, and four stepchildren.

She was a member of Union Grove Christian Church, where she was a member of the choir and loved the old-time gospel songs. She loved to work puzzles and paint on canvas, saws, and rocks. She was also ready with a camera anytime family and friends were near.

Alexander Funeral Service is assisting the Connell Family for the receiving of friends on October 29, 2019 from 6:00 p.m. until 8:00 p.m. and the funeral on October 30, 2019 at 2:00 p.m. with a thirty-minute viewing prior. Interment will be in the Taylorsville City Cemetery following the funeral.