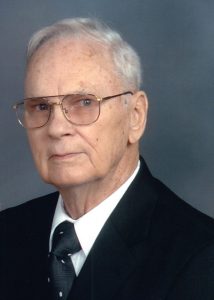 Ralph Cary Warren, 92, of Taylorsville, passed away on Tuesday, October 29, 2019 after a period of declining health.

Born in February of 1927 to the late Ralph and Pauline Page Warren, Ralph served in the US Navy, worked as an insurance adjuster, was an active member at Antioch Baptist Church, and served the Lord there as a deacon. Ralph loved spending time on his tractor, raising a vegetable garden, and woodworking.

Visitation for the Warren Family will be held on Friday, November 1, 2019 at Antioch Baptist Church from 1:00 p.m. until 1:45 p.m. with the funeral service following at 2:00 p.m. Rev. Mark Morris will be officiating the service. Burial will follow in the Woodlawn Cemetery in Hickory.

The family would like to express a special thank you to Medi Home and Hospice of Taylorsville, including the nurses and all care givers.