HICKORY, N.C. — Reflecting on its past successes while paving the way for its future achievements, the Catawba Valley Community College athletic department officially announces its inaugural Hall of Fame class.
Members of the first-ever class include the 1990 CVCC National Championship golf team, former head golf coach Charlie Bock, former men’s basketball head coach and athletic director Jeff Moore and CVCC standout athletes Danny Fraga (baseball), Terri Ferber (volleyball) and Kadesha Gibbs (women’s basketball).
All five individuals and one team will officially be inducted on Monday, Dec. 2 at 6:30 p.m. The induction ceremony will be held at the Workforce Solutions Center on the campus of Catawba Valley Community College. Tickets cost $35 per person.
Sponsorship for the event is available with all funds going toward the future of the CVCC Red Hawks Athletics programs and student athletes. Levels of sponsorship include Premier ($2,000), Legacy ($1,500), Award ($800), Ticket ($500) and Table ($250).
A silent auction will also be held during the Hall of Fame event.
To sponsor the event, register or for more information, contact Terri Livingston at tlivingston652@cvcc.edu or call (828) 327-7000 ext. 4510.
Below are bios on each of this year’s inductees:
• 1990 CVCC National Championship golf team: The five-person team consisting of Bryan Norris, Jim Murray, Eddie Martin, Mark Clodfelter,

and Brad Turner helped lead CVCC to its first and only national championship in school history at McCormick Ranch in Scottsdale, Ariz. All five golfers received All-American status by virtue of their national title win.
• Head coach Charlie Bock (golf): Bock guided the Buccaneers golf program to a national championship in 1990, a national runner-up finish in 1991 and a third-place finish in 1993.
• Danny Fraga (baseball): The CVCC baseball program’s first-ever All-American, Fraga was a key cog in helping the Red Hawks reach their first-ever National Junior College Athletic Association (NJCAA) DII World Series in 2012…as a sophomore at CVCC, Fraga played in 42 games, registering 66 hits, two doubles, two home runs, 62 runs scored, 20 RBIs and stealing 15 bases….Fraga holds the career record for runs scored (110), on-base percentage .568 and hit by pitch (17)…he also owns the season record for times hit by pitch (12)…Fraga went on to complete a successful four-year career at UNC Pembroke, where he played in 105 games for the Braves…finished his playing career with the Frontier League’s Florence Freedom before retiring from baseball in January of 2018.
• Terri Ferber (volleyball): The former Red Hawk middle hitter was a part of 37 wins and just 10 losses during her two season at Catawba Valley in 2006 and 2007…she ranks first in program history in blocks per set (1.788) in a season…finished her Catawba Valley career ranking second in kills per set (3.533), third in total blocks (214), first in blocks per set (1.562) and third in aces per set (0.832)…she helped lead CVCC to its first of eight national tournament appearances in 2006…Ferber became the first-ever two-time All-American in a women’s sport at CVCC (2006, 2007). 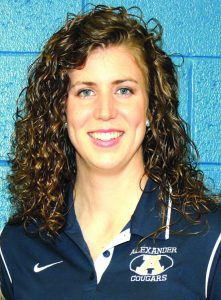 • Kadesha Gibbs (women’s basketball): Gibbs was a part of 51 wins and only eight losses during her two season at CVCC from 2012-14…helped lead the Red Hawks to a program-best 30-1 record during the 2012-13 season, including a Region championship…Gibbs owns program records for highest field goal percentage (61.3 in 2013-14) and rebounds (288 in 2012-13) in a season…finished her two-year playing career at CVCC with 320 two-point field goals and 335 total field goals (second-most in a career)…her 458 rebounds are the third-most in a career at CVCC and her 8.3 rebounds per game and 52 total blocks are tied for the third-most in a career…she ranks fifth on the all-time program scoring list with 604 points…she earned first team All-American status following the 2013-14 season.
• Jeff Moore (men’s basketball/athletic director): Guided the CVCC men’s basketball program to 81 wins and just 46 losses (63.78 winning percentage) during his five seasons as coach from 2004 to 2009…led the Red Hawks to back-to-back 19-win seasons in 2005-06 and 2006-07… won four straight Region championships (2006-09) and three conference championships (2006-07, 2009)…his basketball program won at least 10 games in each of his five seasons…during his tenure as athletic director from 2004-13, Moore helped reestablish the athletic program by starting with men’s basketball and volleyball and later added women’s basketball and baseball in 2008.  During his tenure as AD, Moore led Catawba Valley to 503 wins and just 254 losses (66.45 winning percentage).