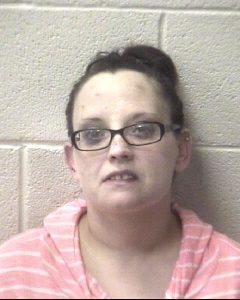 On Saturday, October 26, 2019, officers from the Taylorsville Police Department arrested Laura Mooney, age 32 of Hiddenite, on a variety of charges.

The officers initially responded to the Family Dollar Discount store in Taylorsville, in reference to a shoplifting call. Upon their arrival, they found Laura Elizabeth Mooney in the store with her eight year old daughter, according to Patrolman Gordon Knight of the police force.

Ms. Mooney had concealed in her bra area AA batteries and Glade small space air fresheners, and in her pocketbook she had a salt lamp and auto air fresheners.

Mooney asked the officers if her daughter could take a purse containing her daughter’s medicine to the car and take her medicine. The officers looked in the purse to see what her eight year old daughter might be taking to the car. In the purse, the officers found Methamphetamine, Vyvance, Suboxone, straws, and a meth pipe.