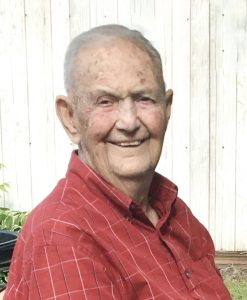 Charlie was born September 8, 1921, in Wilkes County, the son of the late Robert “Bob” Johnson and Blanche Chatham Johnson.

He was a US Army veteran, who served during WWII, and a member of Millersville Baptist Church. He was a farmer, steel mill worker, and later managed Johnson’s Pure Oil Station in Hiddenite. He enjoyed traveling, story telling, and loved his Lord and family very much. He loved to ride his golf cart, especially going to see his chickens.

Including his parents, he was preceded in death by three sisters, Ethel Anderson, China Sharpe, and Pauline McCurdy; and five brothers, Jim, Royal, Robert, Dave and J. C. Johnson.

Those left to cherish and honor his memory include his daughter, Charlene Johnson of Hiddenite; three sons, Barry Johnson of Taylorsville, Terry Johnson, and Bobby Johnson and wife Teresa, all of Hiddenite; seven grandchildren, Brad Marrs and wife Laura of Texas, Heather Bentley and husband Devin, Aaron Johnson and wife Madison, all of Taylorsville, Jeremy Johnson of Statesville, Bryan Johnson and friend Brittany of Hickory, Michelle Johnson of Catawba, and Jonathan Elliott and friend Amber of Hickory; seven great-grandchildren, Alex Johnson, Sophia and Sawyer Bentley, McKenzie Bennett, Brody Elliott, and Ethan and Emily Marrs; a sister, Hazel Morton of Ohio; and numerous other relatives and friends.

The funeral service will be held at 2 p.m., Saturday, November 9, 2019 at Millersville Baptist Church. Rev. Bill Orren will officiate. Burial will follow in the church cemetery, with full military honors accorded by Alexander County Veterans Honor Guard. The family will receive friends from 12:30-1:45 p.m., prior to the service.

Adams Funeral Home and Cremation Services is honored to be serving the Johnson Family.