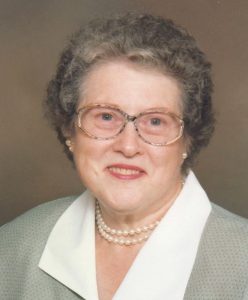 Elizabeth Sigmon Shell, 89, of Conover, passed away peacefully on Saturday, November 9, 2019 at Autumn Care in Statesville.

Born January 12, 1930, in Catawba County, she was the daughter of the late Russell Grady Sigmon, Sr. and Olive Pearl Hunsucker Sigmon.

Elizabeth was a 1949 graduate of Lenoir-Rhyne College, where she received a two-year business and secretarial degree. She worked for 14 years for Hickory Chair Co. and was a homemaker.

Elizabeth was a member of First United Methodist Church in Conover, where she had been active in the United Methodist Women and Circle # 3. She was a member of the Tarheel Garden Club in Conover and enjoyed traveling with her late husband, Bill. In her later years, she enjoyed spending time with her family and hearing about her grandchildren’s school projects and their travels.

In addition to her parents, she was preceded in death by her husband, William “Bill” Carroll Shell.

The funeral service will be held at 2:00 p.m. on Wednesday, November 13, 2019 at First United Methodist Church in Conover with Rev. Dr. Gary Royals officiating. The family will receive friends in the fellowship hall immediately following the service. A private graveside service will be held at Oakwood Cemetery in Hickory prior to the church service.

Condolences may be sent to the Shell Family at www.drumfh-conover.com.

The Shell Family has entrusted funeral arrangements to Drum Funeral Home and Cremation Services in Conover.