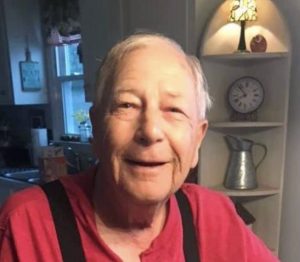 Charlie “Tommy” Carter, 83, a native of St. Matthews, South Carolina, passed away peacefully Monday, November 11, 2019 at his home in Mineral, Virginia, where he recently relocated.

After high school, he served in the 1st Army and he was a veteran of the Lebanon conflict in 1958. After completing honorable service, he fulfilled a career as a truck driver for Champion International. He enjoyed working and only retired a few years prior to his relocating to Mineral, Virginia.

On January 24, 1964, he married Norma “Jeannie” Carter in Aiken, South Carolina. On June 14, 1965, and August 15, 1968 respectively, he welcomed his two beautiful daughters, Robby Ann and Jody Jean, who were the most important part of his life. Charlie was a devoted father and grandfather.

He loved playing guitar and singing in a band called the Nighthawk, where he and Mom met. Tommy loved helping others and was a spiritual man who was actively involved in church activities, including singing in the church choir. He enjoyed having coffee at the local coffee shop with his friends, fishing with family, and spending time with his children, grandchildren, and great-grandchild.