The Alexander County Board of Education met on Tuesday, November 12, 2019, at the Central Office. All members were present. The meeting started with a moment of silence.

School board members approved just under $1.9 million in repairs, remodel, and additions to school district facilities. The projects will be completed using half-cent sales tax money and lottery money. School districts have allocations of money that are only available for capital projects and cannot be used for general operating expenses. The $1.9 million approved will be paid for with the fund balance from the half-cent sales tax and lottery money which is $7 million. 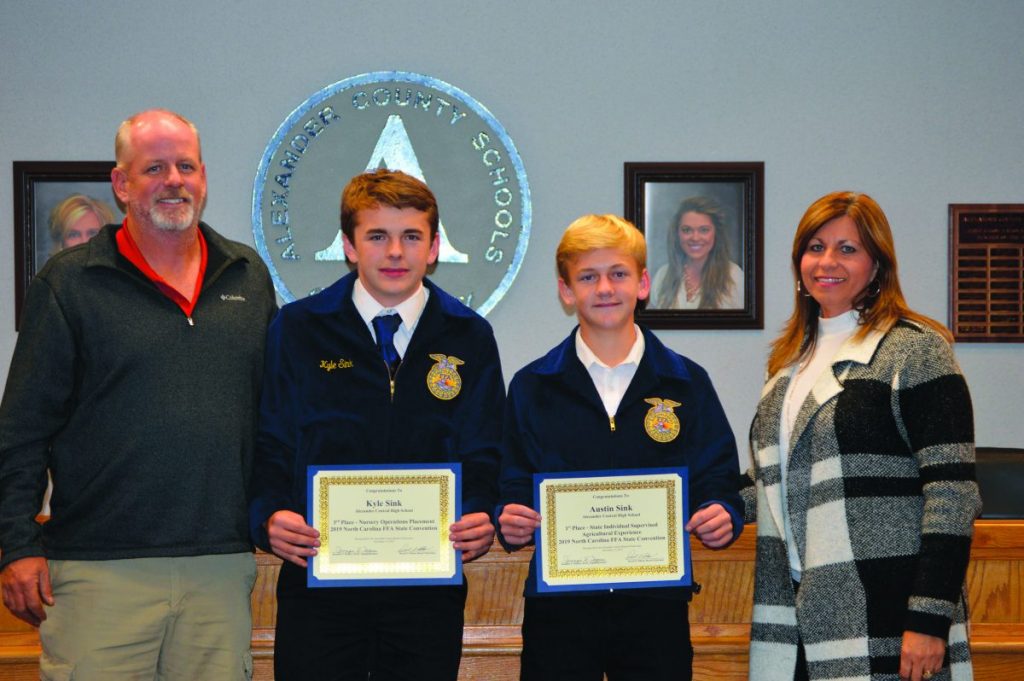 Two ACHS students and one graduate were recognized for placing in the state FFA convention competition in June at the Raleigh Convention Center. Austin Sink was recognized for placing first in the State Individual Supervised Agricultural Experience Awards/Tool Identification. Kyle Sink took third place in State Nursery Operations Placement. Austin and Kyle are the sons of JD and Deborah Sink.

Sam Sandifer, an ACHS graduate took third place in State Agricultural Mechanics Design and Fabrication Entrepreneurship. Sam is attending Campbell University. He is the son of Mike and Ginny Harrison and Sam Sandifer.

Two ACHS students were recognized for competing in the Pre-Apprentice contest at the North Carolina State Fair held in Raleigh in October. Holden Ritchie and Will Watts were first-place winners in the carpentry division. The team built an impressive dog house. Holden is the son of Dannie and Adele Ritchie. Will is the son of Andy and Jeana Watts. 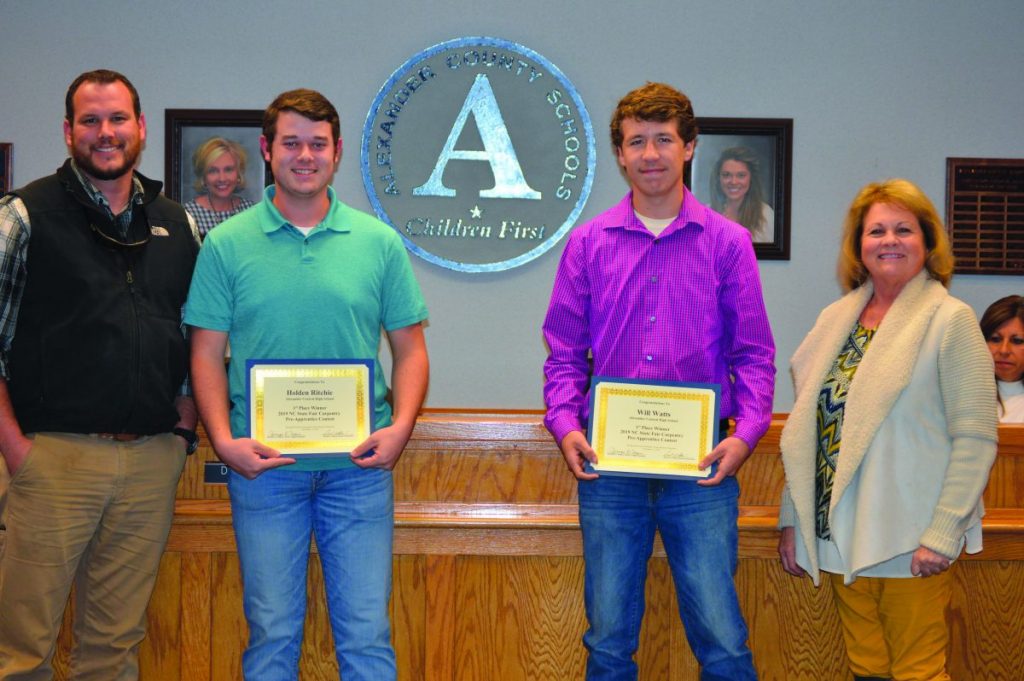 PRE-APPRENTICE STUDENTS HONORED — Two ACHS students were recognized at the November 12 school board meeting for competing in the Pre-Apprentice contest at the North Carolina State Fair. Pictured above from left: Josh Bowles, Holden Ritchie, Will Watts, and School Board member Cindy Sellers. 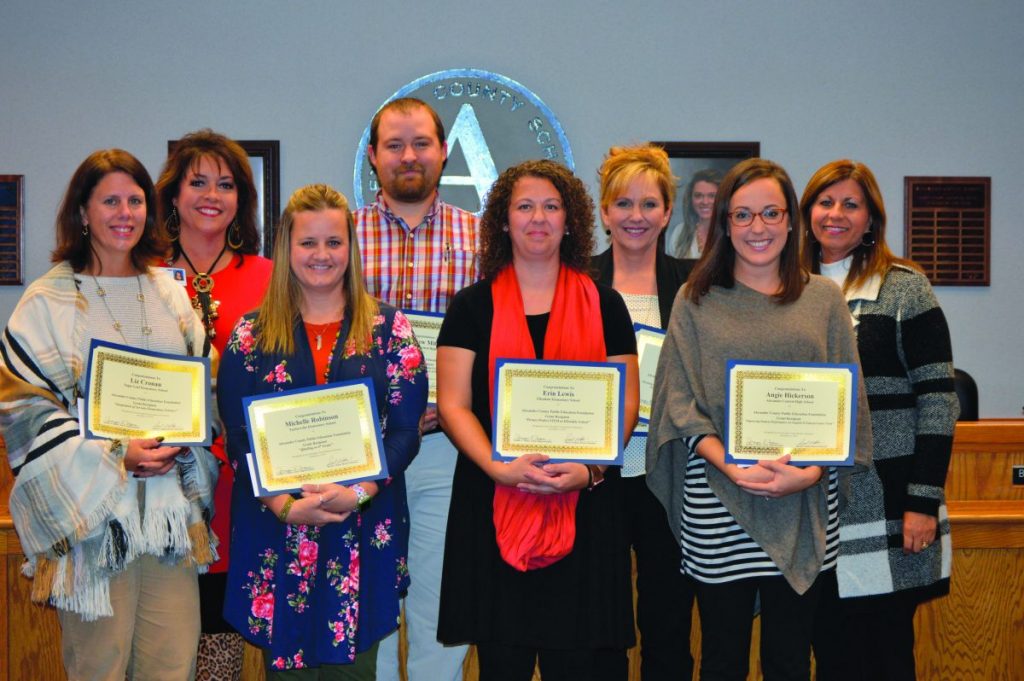 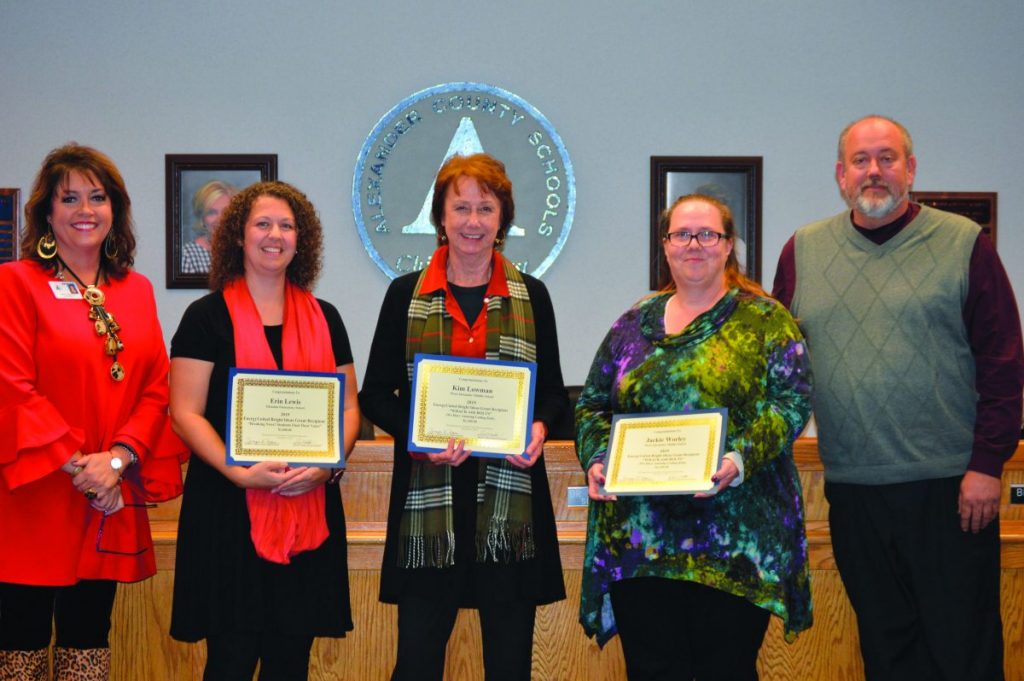 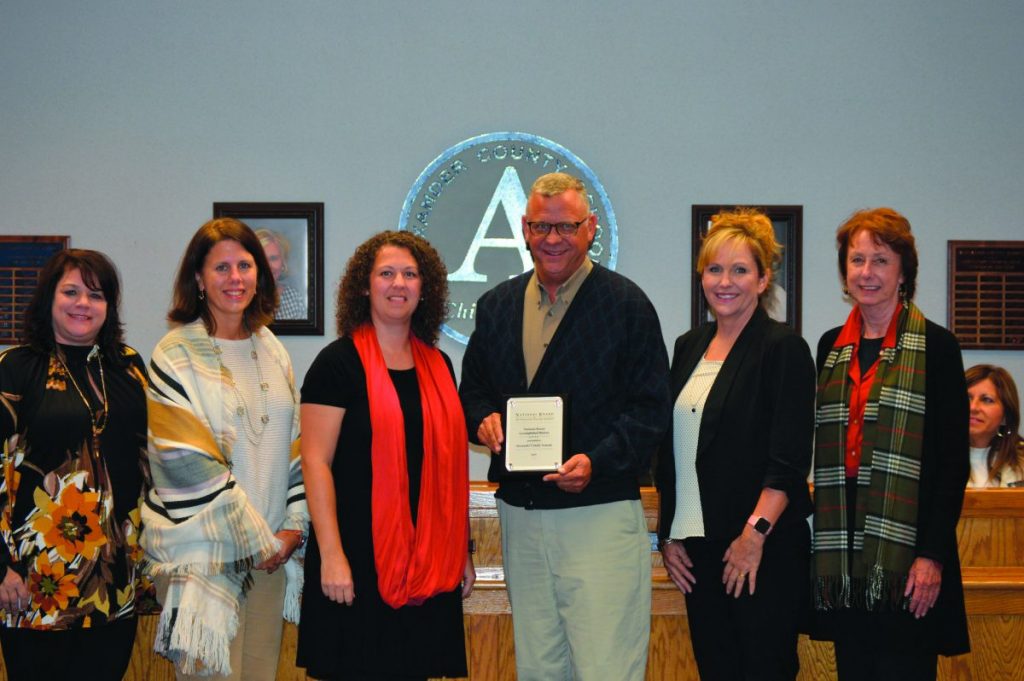 NAT’L BOARD ACCOMPLISHED DISTRICT — Alexander County Schools is one of the 81 districts nationwide to be named a National Board for Professional Teaching Standards accomplished district. National Board Certified Teachers attending the November school board meeting helped accept the award. Pictured above from left: Crystal Hoke, Liz Cronan, Erin Lewis, School Board Chairman David Odom, Becky Dupuis, and Kim Lowman.

Superintendent Dr. Jennifer Hefner was presented the Paul Harris Fellow Recognition Award by the Taylorsville Rotary Club at the meeting. School board members Cindy Sellers and Matt Cooksey are also Rotary Club members and presented the award. The Paul Harris Fellow recognition acknowledges individuals who contribute, or who have contributions made in their name, of $1,000 to The Rotary Foundation. 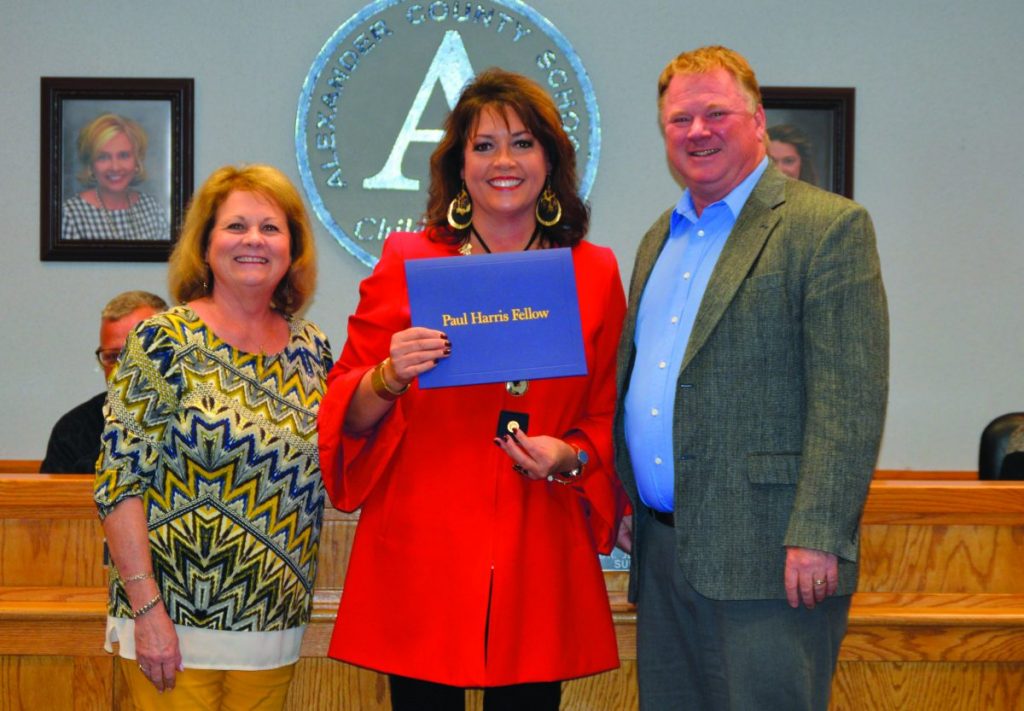 Stony Point Elementary School Principal Andy Palmer gave the school update at the meeting. Palmer began the presentation by outlining the use of Title I funding at the school. Two interventionists are employed with the funding. Kailin Sweet is a part-time interventionist and Carsyn Lackey is a full-time teacher assistant interventionist.
Other area funded by Title I money include STEM supplies, a one-day Discovery event at the school, two weeks of an artist in residence, the development of an outdoor classroom, and updates to the media center.

Palmer expressed gratitude to the Head Start Program and staff for the impact they have on the school.

The fall can food drive was a great success for the school. They exceeded their goal for the first time in recent years by collecting 5,113 can goods.

Palmer praised the ACHS Care Squad which comes to the school and works with students on Fridays. He indicated students look forward to the visits.

School Board Chairman David Odom presented a Year in Review, highlighting events and accomplishments of students, staff, and the school system. One major accomplishment includes the development and implementation of the 2019-2022 Strategic Plan for the school district. All other accomplishments build on the goals and strategies outlined in the plan.

Board of Education pay increase requested

Board members voted unanimously Tuesday to support a letter to the county commissioners requesting a change in the compensation for the Alexander County Board of Education. The letter was sent in March 2019 with no response from the Board of Commissioners.

North Carolina State Statute indicates the boards of commissioners for counties may fix the compensation for boards of education. Elected school board members receive $120 per month and $20 per meeting (the board chairman receives $240 per month) which equals $1,440 per year, in comparison to the county commissioners at a rate of $19,600 per year (with health insurance benefits) and the town council stipend of $9,060 (with health insurance benefits).

For the full presentation watch the meeting on the schools YouTube channel at https://www.youtube.com/watch?v=cH_kfe7bUDE. Chairman Odom’s wish for the school board is the introduction of the per diem change request and begins at 58 minutes in the school board meeting.

Dr. Hefner announced Melissa Canter, Wittenburg Elementary teacher and Alexander County Schools’ Beginning teacher of the Year 2019 is one of 27 finalists in the running for 2019 NC Beginning Teacher of the Year at NCCAT Cullowhee Campus. The award will be presented December 5.

The school board members reviewed three policies presented by Finance Director Sharon Mehaffey for a second reading. Two policies were approved with policy no. 3420, Student Promotion and Accountability being brought back next month for a third reading.

The board voted to approve the non-federal share waiver request presented by Alexander County Head Start Director Macy Jones. The request comes as a result of the programs inability to count all the NC Pre-K funds in the share match. This is only the second time in the history of the program that the waiver has been requested.

The next regular meeting of the Alexander County Board of Education will be held on Tuesday, December 10, 2019, at the Central Office.