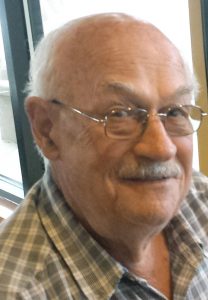 Visitation will be Sunday, December 15, from 1:30 to 2:15 p.m., at Alexander Funeral Service in Taylorsville, with the funeral service at 2:30 p.m. Burial, with full military honors, will follow in the Carson Chapel Church Cemetery.

A resident of Charlotte, where he retired from Overhead Garage Doors after 43 years, Mr. Wike came back home to Alexander County in retirement. Born to the late Poley Crouch and Mary Elizebeth Deal Wike, Jack served in the United States Navy during the Korean Conflict.

In addition to his parents, he was preceded in death by a son, Brian Todd Wike, as well as four brothers, R.D., Clyde, Harold and Junior Wike.

Jack is survived by his wife, Joyce Crouch Wike of the home, who was his passion, beyond Carolina Panthers and NASCAR. He has a son, Tony Wike and wife Ronita of Grovetown, Georgia. A stepdaughter survives, Melody Frizell and husband Clarence of Hickory. Mr. Wike had two twin sisters, Annette Fisher of Charlotte and Jeanette Austin and husband Terrell of Taylorsville. Two brothers will miss Jack, Sam Wike and Billy Wike, both of Taylorsville. He has three grandchildren and nine great-grandchildren. There are a number of nieces and nephews.