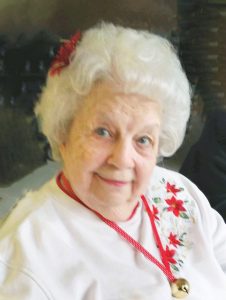 Ruth was born July 29, 1925, in Caldwell County, the daughter of the late Moses Prater Richey and Fannie Estelle Frye Richey.

She had worked in the furniture industry and retired from Clayton Marcus. She was a lifelong member of Shiloh Lutheran Church, where she taught Sunday school for a number of years. She loved her children, grandchildren, and great-grandchildren. She enjoyed going out to eat and meeting with friends.

Including her parents, she was preceded in death by her husband, Wade Hampden Hall; two sisters, Blanche Richey and Lucy Little; and two brothers, Quez Richey and Arnold Richey.

The funeral service will be held at 3 p.m., Sunday, December 22, 2019 at Shiloh Lutheran Church. Pastor Andrew Weisner will officiate. Burial will follow in the church cemetery. The family will receive friends one hour prior to the service.

Adams Funeral Home and Cremation Services is honored to be serving the Hall Family.