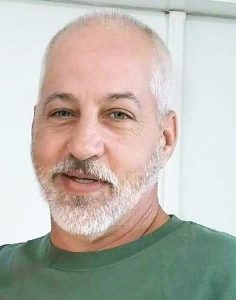 David Wesley Elder, 53, of Taylorsville, passed away on December 18, 2019 surrounded by loved ones.

Born to Bobby Lee Elder and Shirley Mitchell Sigmon, David served in the US Army, was of the Baptist faith, and worked at Mitchell Gold and Bob Williams for several years. David enjoyed working outdoors in his garden, landscaping around his house, and received a lot of joy playing with his dogs, but most of all he loved the time he spent with his daughter, Malorie.

David was preceded in death by his father, Bobby Elder, and his stepfather, Gary Allen Sigmon.

Those left to cherish the memory of David include his mother, Shirley Mitchell Sigmon; daughter, Malorie Elder; sister, Stephanie Brown; and brother, Phillip Elder, all of Taylorsville. David also leaves behind man’s special friend, “Gator,” along with other extended family.

In lieu of flowers, the family requests that donations be given to Hartman’s Haven Dog Rescue @ PO Box 742, Conover, NC 28613.