In game two of the afternoon, the Alexander Central JV Men’s Squad upped its record to 2-0 in NWC play with a 39-23 victory over the St. Stephens Indians.
Alexander outscored the visitors in all four periods and rolled to the 16-point home victory. The win lifted the Cougars record to 8-3 on the season.
Freshman forward Andrew Fox led the effort with an 11-point performance. Dalton Beck tallied nine points, with Dusty Sigmon chipping in with six points.
The Alexander JV squads are slated to travel to Morganton for a JV-only doubleheader with the Freedom Patriots on Wednesday, January 8.
VARSITY TEAMS  POST SWEEP
Alexander Central’s Varsity Squads kept up their recent stellar play with a twinbill sweep over the St. Stephens Indians on Tuesday evening in the Varsity Gym in Taylorsville. 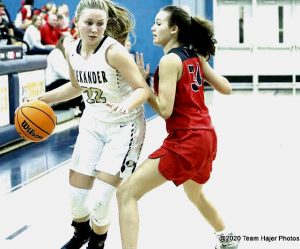 Above, freshman Sydney Hayes, who scored 14 points, dribbled around a Saint defender during Alexander’s 55-42 win.

Freshman Sydney Hayes led three Lady Cougars in double figures as ACHS cruised to a 55-42 win over the Lady Indians in the first game of the varsity contests. The win lifted the Lady Cougars to 10-4 overall and 2-0 in the NWC, while St. Stephens fell to 2-13 overall and 0-3 in league games.
Despite shooting just 30 percent from the floor, the Lady Cougars took advantage of 29 Saint turnovers to secure the 13-point win. ACHS scored 19 points off Indian miscues.
Hayes paced the Alexander scoring with 14 points, while Gracie Harrington scored 13 points and six for 12 shooting from the field. Teagan Pennell hit two three-pointers and converted four of five shots from the foul line to finish with 12 points.
Senior point guard Lanie Hammer continued to guide the Lady Cougar club with another solid effort. Hammer grabbed a team-high 10 rebounds in the win and finished with three points, six assists, two steals, and two blocks. 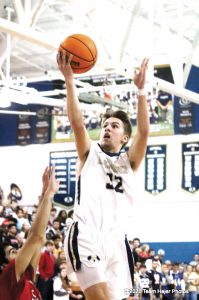 Jem Lowrance soars to the basket for a layup during Tuesday’s varsity men’s showdown in Taylorsville. Both ACHS teams improved to 2-0 in the NWC with Tuesday’s wins.

In the final contest of the night, Alexander’s Varsity Men cruised to a second straight win with its 70-44 victory over the St. Stephens Indians.
The Cougars shot 52 percent from the floor and hit 10 of 19 three-point attempts en route to its second double-digit league win in five days. The Cougars improved to 2-0 in the league and 9-5 overall with the win.
ACHS continued to protect the basketball, committing just 10 turnovers in the game. The team also shared the ball well in the game as it recorded 21 assists on 27 made baskets.
Evan Presnell and Maddox Kerley led the way for the Alexander offense. The pair netted 18 points each to pace the Cougars.
Presnell hit six three-pointers in the game, while Kerley converted on seven of 10 shots from the field and snared a team-best nine rebounds. Senior Jem Lowrance also scored in double figures, hitting six of 12 shots from the floor for 14 points.
Will Rose (18 points) and Zane McPherson (16 points) led the Saint attack in scoring.
ACHS is slated to play at McDowell on Friday evening, January 10. JV games will tip at 4 pm in the JV gym, with varsity contests starting at 6 pm in the Titans’ varsity gym.
Alexander will play varsity games at Freedom on Tuesday, January 14, beginning with women’s action at 5 pm.