At their Monday, January 6th meeting, Alexander County Commissioners considered a request from the Alexander County Board of Education for a salary increase for board members. [See Dec. 18 article, beginning with a red headline near the bottom of this page, for a comparison of local elected boards’ salaries.] According to NC General Statute 115C-38, the tax-levying authority for a local school administrative unit “may” fix the compensation for the board of education.

“It’s a rather unusual statute, I think, that we set their salaries,” commented Commissioner Jeff Peal. “They have to present that to us, so they can raise their salaries. But it’s a budgetary issue on their end, not on our end.”

“If they run out of money, they come to us,” Reese said.

“Both sides of this issue have valid points,” Chairman Ryan Mayberry stated. “It is taxpayer money. If we approve this, it does not mean that additional tax dollars come out of Alexander County Government and go to the Alexander County school system. What it does mean is that the money that they are already getting, and already have, those additional dollars for salary come out of that. I really have to agree with Mr. Peal. This shouldn’t be our decision; it should be a decision of their board. I don’t know why [the statute] is written this way. The voters have complete control. If they don’t like it, what the school board’s done, then they can vote for new people.”

Commissioner Larry Yoder said the school board members have a difficult and important job. He suggested approving a salary increase for the Board of Education, but in a lesser amount. Yoder offered the figure of $420 per month per member instead of the requested $600 per month — the current regular monthly meeting pay is $120 per member, with school board chairman receiving $240. However, the compromise idea did not gain traction.

Reese noted he was on the school board in his first term back in 2004 when the last salary increase request ($60 to $120 per month) was approved.

“I’m not opposed to an increase, but I am opposed to a five-times increase of what they’re getting,” Reese explained.

Commissioner Marty Pennell said he believed the pay increase could spark more interest in candidates for the school board.

After discussion, the board unanimously approved a motion to grant authority to the Board of Education members to set their own salaries.

Commissioners approved a proclamation declaring that January is National Radon Action Month in Alexander County. Radon is the leading cause of lung cancer among non-smokers. One in 15 homes in the U.S. has an elevated level of radon. Board members encourage citizens to have their homes tested for radon.

The Board heard from two citizens who voiced issues in the public comment portion. Kathy Riddle of the Alexander Friends of the Library, urged the public to join the Friends group, to assist library programs. The FOL membership drive is underway.

Also on Monday, the board unanimously voted to pass a formal resolution required to award the bid of the Bethlehem Sewer Collection System Expansion and Pump Station Upgrade Project to Two Brothers Utilities, LLC, in the amount of $5,149,557.40.

Commissioners approved Budget Amendments #29-33. Amendment 29 increases the JCPC Budget $19,308 for FY 2019-2020 Expansion funds from the State, which includes “Raise the Age” provision, allowing most 16 & 17 year olds charged with crimes to be served in the Juvenile Justice System, rather than being charged as adults. Amendment 30 transferred $67,975 from the General Fund to the School Capital Improvements Fund, based on the amount of FY 2019 school sales tax revenue in excess of school debt service payments. Amendment 31 reduced the General Fund budget $1,000 for the portion of the Code Red (telephone warning system) user fees to be paid by the County Water & Sewer Fund. This $1,000 share of the annual fee is not an expense or revenue of the General Fund budget. Funds are available in the Water & Sewer budget for FY 2020. Amendment 32 increased the DSS budget for the cost of replacing the shingle roof on DSS buildings and for the purchase of two new vehicles through the NC Sheriff’s Association vehicle procurement program (available for any county vehicles), a total of $94,325 appropriation. Amendment 33 increases the budget by $71,270 for a 2.5% cost of living adjustment, effective on Feb. 1, 2020, a transfer between departments, and the year-end payroll accrual that will affect the first two pay dates in July 2020.

County sales tax revenues are up, said Rick French, County Manager. The main sales tax is 10.8 percent above this period last year and the new sales tax is about 7 percent better than 2019.
French said the easements are closer to being obtained on the Bethlehem Sewer Project and the Stony Point School Sewer Project. The water project in Bethlehem is moving along well. Buckeye Bridge is finishing up in Wittenburg Springs subdivision and will move next to Fox Court.

The next County Commissioners’ meeting will be Feb. 3, 6:00 p.m., at the CVCC Alexander Center in Taylorsville, Rm. 103.

[For handy reference, The Times’ December 2019 article on local elected boards’ salaries is shown below.]

In light of Board of Education’s salary increase request

[Editor’s Note: This online article corrects miscalculations in the Dec. 18, 2019, print edition. A handwritten notation in paperwork supplied to The Times, denoting Town elected officials are “paid 2 times per year” mistakenly led to an accidental doubling of Town Commissioner and Mayor salary information in the print article. The Times staff regrets this error.]

Some readers have asked The Times to review the current compensation/salary status of all three local elected boards (Town and County commissioners and the Board Of Education). The information compiled below and the attached chart will hopefully illuminate the current situation for readers.

Alexander County Board of Education salaries

The last increase in pay for BOE members was on July 1, 2004, according to Chairman David Odom.

The members do NOT receive any of the following: travel stipend, mileage reimbursement, health insurance, life insurance, internet stipend, mobile phone stipend, or bonus. BOE members have use of a Chromebook computer while serving.

The BOE is requesting the pay for members to be:
Monthly meeting $600
Special called meeting $40
Other school functions $20

This would amount to $7,200 per year base salary for each member or $50,400 total for all. There would be no special rate for the chairman, if approved.

The travel and internet allowances go in commissioners’ W-2 forms as allowances and are not dollar per dollar reimbursements for expenditures. Commissioners are not required to track mileage.
Group insurance paid by the County is available to the Commissioners if they choose to enroll. For the 2019-2020 budget year, the annual amounts are as follows:
Medical $11,758
Dental $371
Vision $73
Life $35

For 2019-2020, four county commissioners have all the group insurance coverage through the County and one commissioner chose to only have the life insurance.

There are four Town of Taylorsville Commissioners and one Mayor of Taylorsville. The Town Commisioners are paid $6,057.45 each per year base salary, plus a 2% July bonus ($121.15) and a 3% Christmas bonus ($181.72). In addition to salary, benefits include FICA (about $486 per member per year), term-only life insurance while in office at about $300 per member per year (varies due to age-based benefits and cost), and non-group insurance compensation ($675 paid each quarter as a 1099; no board members are on the Town group health insurance plan), for a total of about $9,800 per commissioner per year.

The total Town Board and Mayor salary and benefits are approximately $50,848 yearly. If they travel, they are reimbursed at the Federal mileage rate. Town of Taylorsville elected officials do not receive laptop, cell phone, internet or technology stipends. 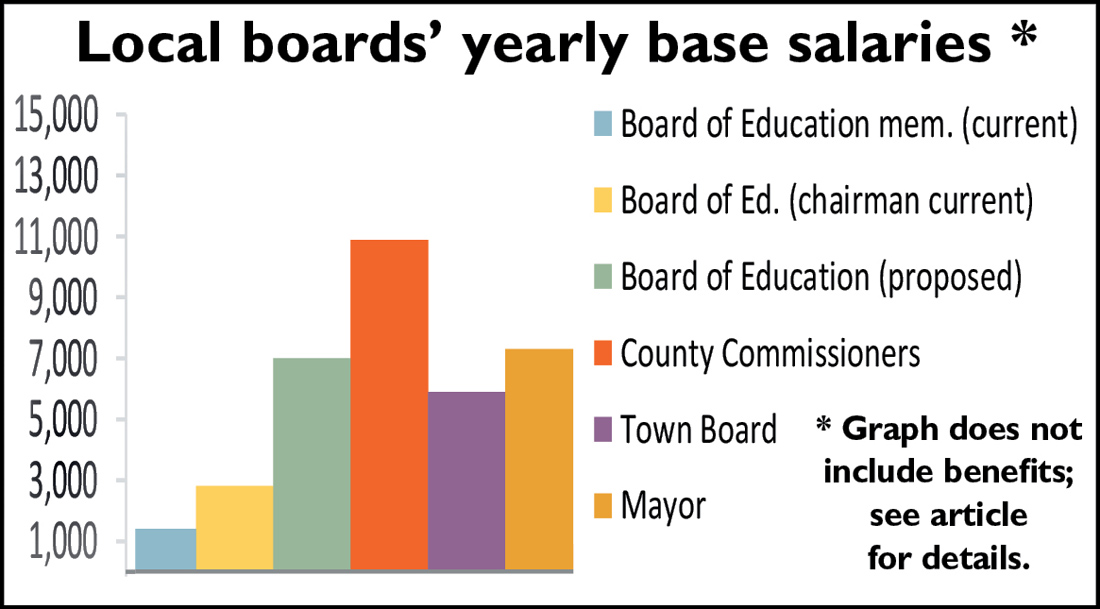 One way of comparing salaries is to consider the compensation as a percentage of the board’s General Fund budgets.

The Alexander County Commissioners’ total compensation is less than half of 1% of the County’s General Fund budget (0.3%), not including water/sewer funds.

The Town of Taylorsville Commissioners’ and Mayor’s compensation is 2.6% of the Town’s $1,979,850 General Fund budget (not including water/sewer).

However, one might also want to take into account the size of organizations the boards manage. One way is to compare the number of employees which are overseen by the boards.

Alexander County Government has 464 employees (including full-time and part-time).