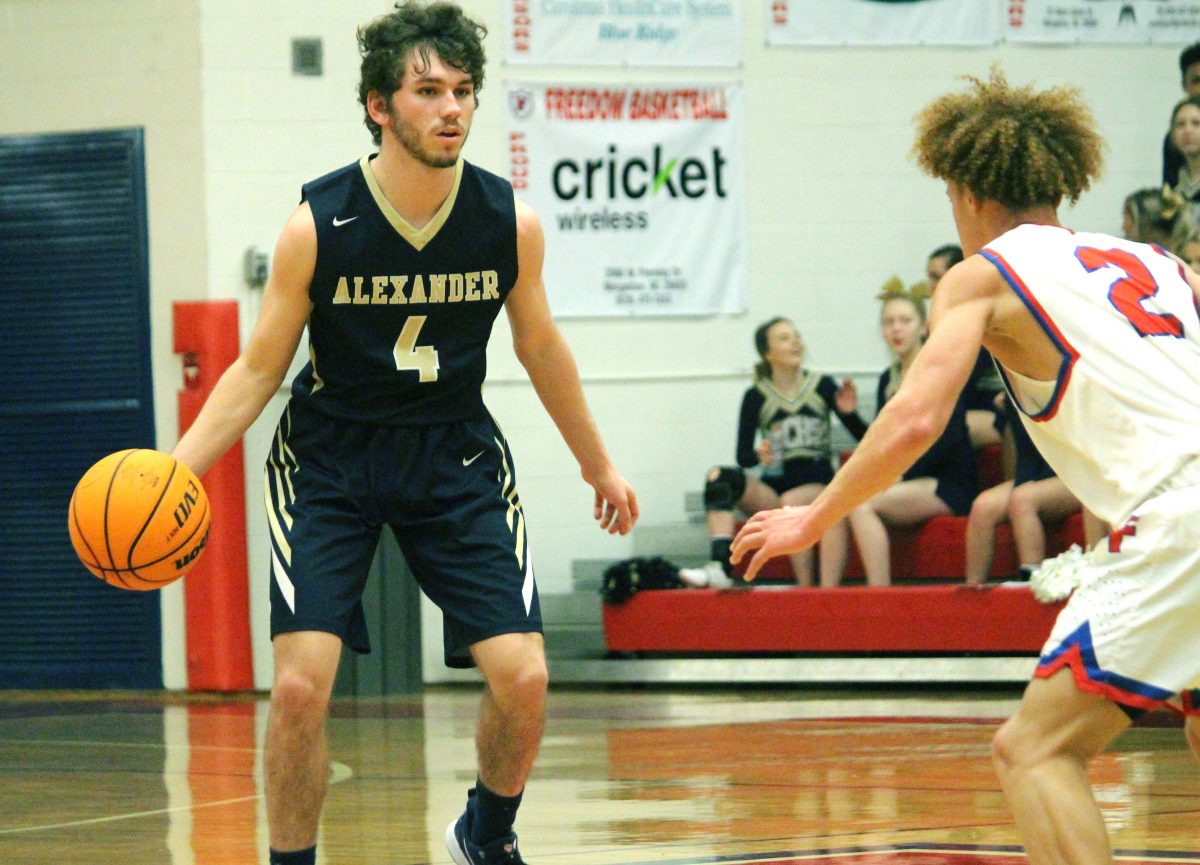 Dalton Stikeleather looks to drive past a Freedom Patriot defender.

By D.N. PENNELL, Jr.
Alexander Central’s Varsity Basketball Teams made the trip to Morganton to face the talented Freedom Patriots squads in a NW 3A/4A twinbill on Tuesday evening, January 14.
The Patriot squads grabbed a sweep over the visiting Cougars, winning both contests by double figures. The Lady Cougars slipped to 2-2 in conference play and 10-6 overall after a 65-44 loss to the league leading and unbeaten Freedom team. The Patriots ran their record to 14-0 with the victory. In the nightcap, Freedom raced to an early start and claimed a 72-58 win over the ACHS Varsity Men’s Team. 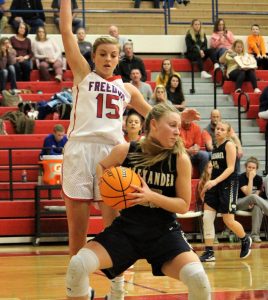 The opening game of the two-game set saw the Cougars play Freedom to a two-point game after one period. The Pats led 16-14 after the first quarter before breaking the game open in the second session. Behind the sparkling play of LRU commit  Blaikley Crooks, Freedom exploded in the second period, outscoring the Cougars 29-6. The home team led 45-20 at the half and never looked back en route to the win.
Crooks led all scorers with 22 points in the game. For Alexander, freshman guard Sydney Hayes led the way with a team-best 16-point performance. Gracie Harrington chipped in with 10 points in the loss.
In the nightcap, Freedom raced to an 11-1 start to open the game and rolled to a 14-point victory over the Taylorsville visitors. Freedom, which was coming off its first loss of the season last Friday against South Caldwell, wasted no time erasing the possibility of a second straight setback.
Patriot Que Garner hit two three-pointers to open the game and finished the night with a game-high 21 points. Evan Presnell paced the Cougars with 14 points. Forwards Zach Herman and Maddox Kerley finished with 10 points each.
JV COUGARS DROP PAIR
Due to exam schedules, the Cougar JV games vs. Freedom were played on Wednesday, January 8.
In a two-game event in Morganton, the JV Patriots posted two wins over the young Cougars.
Freedom claimed a 44-33 win over the Lady Cougars in the opening game of the day. In the loss, Alexander’s Cheyenne Childers paced the Cougar offense with 10 points.
The JV Patriot Men led 36-13 at the half and cruised to a 62-43 win in the second contest of the evening. Dusty Sigmon with 16 points and Grayson Presnell with seven points paced the ACHS offense.
COUGARS HOST HICKORY FRIDAY
Alexander Central will return to league play on Friday, January 17, when it hosts the Hickory Tornadoes for four games in the Cougar Den. All games will be played in the varsity gym, starting with the JV women’s contest at 4 pm.
The Cougars host South Caldwell for three games on Tuesday, January 21. South Caldwell does not field a JV women’s team. Tuesday’s action will begin with the JV men’s game at 4:30 pm. All games on January 21 will be played in the varsity gym.